OPEC to raise oil production in July, stays mum on what’s next

LONDON (Bloomberg) --OPEC+ stuck to its plan to hike oil output in July, but Saudi Arabia’s energy minister kept the market guessing as to whether the group will add more supply later this year to keep pace with the accelerating global recovery.

With oil prices rising above $70 and demand for gasoline and diesel increasing in the U.S., China and Europe, OPEC+ is now at the center of one of the most pressing debates in markets: the threat of inflation. 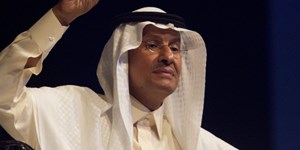 “The demand picture has shown clear signs of improvement,” Saudi Energy Minister Prince Abdulaziz bin Salman said, in some of his most upbeat comments since the crash last year. But pressed on whether more supply increases will be needed, he said: “I will believe it when I see it.”

OPEC and its allies have spent more than a year rescuing prices from historic lows and only cautiously adding supply. Now the story is shifting: the oil market is heading into deficit and crude prices are fueling inflation concerns.

Letting the market overheat risks undermining the recovery. But the cartel also has to manage the dual risks of Iranian supply coming back online and any resurgence in the virus and its variants.

The group will press ahead with an increase of 841,000 barrels a day in July, following hikes in May and June, delegates said after a meeting that lasted less than 30 minutes, making it one of the shortest in recent history.

After July, OPEC+ is scheduled to hold production steady until April 2022, according to the deal signed a year ago to rescue producers from a bitter price war. While the agreement can be renegotiated -- and there’ll be pressure to do so as demand continues to recover -- it provides a fallback position for the group.

Prince Abdulaziz said he was sticking to the terms of that deal “verbatim.”

The Islamic Republic is in talks to revive a 2015 accord that limited its atomic activities in return for U.S. sanctions relief. While Tehran was seeking to conclude negotiations before its presidential elections on June 18, officials on Tuesday suggested that may not happen until August.

If a deal is struck and Washington eases sanctions, analysts forecast that Iran could increase its crude production to 4 million barrels a day from 2.4 million over the next year.

The alliance could start to feel external pressure to ease prices as the deficit in the market becomes clear from next month. Fatih Birol, executive director of the International Energy Agency, told Bloomberg Television earlier on Tuesday that without more supply, prices will face further upward pressure.

“One thing is clear,” Birol said. “In the absence of changing the policies, with the strong growth coming from the U.S., China, Europe, we will see a widening gap” between demand and supply.