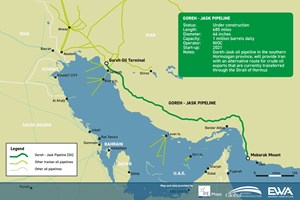 (Bloomberg) - Iran started its first transfer of crude oil via its strategic Goreh-Jask pipeline, allowing the country to bypass the Strait of Hormuz, the state-run Islamic Republic News Agency reported.

The oil passed through the pipeline’s second pump house and reached a facility near the port of Jask, IRNA said, without giving any details on the size or volume of the transfer.

Earlier this month the state-run National Iranian Oil Co. said it had started injecting crude into the pipeline and that oil shipments from the Jask region on the Gulf of Oman coast will start next month, adding that the 1,000-kilometer (620-mile) conduit will be officially opened by President Hassan Rouhani in the near future.

Most of Iran’s energy exports currently pass through the Strait of Hormuz, a narrow shipping channel on the Persian Gulf that was plunged into crisis after former President Donald Trump abandoned the 2015 nuclear deal and reinforced sanctions on Iran’s oil sector and wider economy.

Oil markets are closely watching talks between Iran and world powers to revive that accord and remove a raft of U.S. sanctions from the Islamic Republic’s energy sector and wider economy, helping it reinstate millions of barrels of exports.

Earlier this month Rouhani said negotiators had already accepted that sanctions on Iran’s oil, shipping, insurance and banking industries will be lifted, triggering a drop in oil prices.