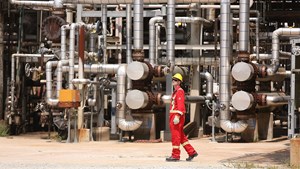 (Bloomberg) --Royal Dutch Shell Plc was ordered by a Dutch court to slash its emissions harder and faster than planned, dealing a blow to the oil giant that could have far reaching consequences for the rest of the global fossil fuel industry.

Shell has pledged to reduce its emissions of greenhouse gases by 20% by 2030, and to net-zero by 2050. That’s not enough, a court in The Hague ruled Wednesday afternoon, ordering the oil producer to slash emissions by 45% by 2030 compared to 2019 levels.

While only legally binding in the Netherlands, the ruling may be scrutinized in other countries amid a new era of litigation related to climate change. Shell, which can appeal the decision, wasn’t able to immediately comment on the matter.

There are currently 1,800 lawsuits related to climate change being fought in courtrooms around the world, according to the climatecasechart.com database. The Shell verdict could have a powerful ripple effect, not least among its European peers including BP Plc and Total SE. Those companies have set similar emissions targets, which have also been criticized by campaigners for not going far enough.

Shell already has targets to reduce its greenhouse gas emissions. But so far those figures have only come down thanks to the impact of the coronavirus pandemic as well as selling oil and gas assets. While divestments reduce Shell’s own emission profile, those pollutants are still pumped into the atmosphere and can sometimes even increase.

“Judges around the world are being confronted by climate change cases and are looking to other judges for points of reference,” Michael Burger, executive director of Columbia Law School’s Sabin Center for Climate Change Law which collates the database, said before the verdict.

The case against Shell, which has headquarters in The Hague and London, was brought by local environmental group MilieuDefensie. The campaigners accused the company of violating human rights by not adhering to the Paris Agreement’s aim of limiting the average increase in global temperatures to less than 1.5 degrees Celsius.

While many countries, including the Netherlands, have signed up to the Paris climate deal, companies such as Shell were not part of the agreement and so far haven’t been bound by national pledges.