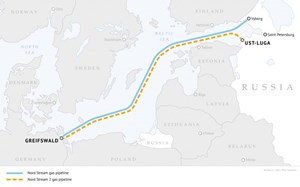 (Bloomberg) --A natural gas pipeline linking Russia and Germany edged closer to completion after the Biden administration loosened sanctions of the controversial project, but significant hurdles remain before the fuel can start flowing under the Baltic Sea.

Biden’s change in stance from Donald Trump’s fierce opposition to the pipeline means Nord Stream 2 will likely get finished as soon as this year. But the sanctions left in place could make it hard to gain all the necessary approvals to start operations. This year’s German election, where the Green Party are contenders to lead the next government, also clouds the picture.

“It’s not the end of the story,” said Kirsten Westphal, a senior analyst at the German Institute for International and Security Affairs. “The question is now when and how the pipeline will be operating, what volumes of which supplier will come through it.”

The Biden administration’s decision not to enforce sanctions over Nord Stream 2 AG, the company building the pipeline, and its chief executive officer is seen by Germany as a key turning point in the long-running spat over the pipeline. The waiver avoids escalating a confrontation with Chancellor Angela Merkel’s government, which has long argued the link will increase the security of Europe’s energy supply.

Construction on the 1,230-kilometer (764-mile) pipeline began in 2018 and became a major source of friction between the U.S. and its European allies. While Biden’s essential position is the same as Trump’s -- the project undermines European security by tying the continent more closely to Moscow -- he’s keen to rebuild America’s broader alliance with Berlin.

Besides, Europe’s reliance on Russian gas may not be as stark as it was a few years ago. The region’s gas market has become more competitive with the increased availability of liquefied natural gas, or LNG. Gazprom remains a traditional key supplier for some eastern and central European countries, but western Europe gets gas from sources including Norway, Qatar and Africa.

Despite increasing tensions with Russia in recent years, Merkel’s support for Nord Stream 2 hasn’t wavered. But her chancellorship is in its twilight and this fall’s election may be key to the pipeline’s future. The Greens, which lead in some polls for Germany’s elections in September, are unequivocal in their opposition to the link, though the process of building a governing coalition may produce a compromise.

Merkel said Thursday that the U.S. President had taken a step closer to Germany in his decision to drop sanctions. While she welcomed the move she was quick to point out that Germany’s interests in relation to Russia were still a point of discussion.

“The Biden administration seems reluctant to be too heavy-handed with sanctions at this final stage of pipeline completion as it would ruin its relationship with Germany but not stop the project,” said Katja Yafimava, senior research fellow at the Oxford Institute for Energy Studies.

Russia welcomed the U.S. decision, yet pointed out that Nord Stream 2 has continued construction even amid earlier restrictions.

The gas link may be completed this year, Russia’s Energy Minister Nikolay Shulginov said last week. As of the end of March, 95% of the pipeline was complete, according to a Nord Stream 2 spokeswoman. At that time, about 121 kilometers were still to be laid.

So far, Russia has been able to replace the sanctioned vessels, logistics companies and other suppliers needed for construction. It’s still unclear whether it can get the specialized verification and certification service required to run gas along the pipeline.

The next U.S. State Department report on sanctions is set to be delivered to Congress in 90 days. Both countries should now use the time to discuss the problematic aspects of the project, German Foreign Minister Heiko Maas said on Wednesday.

“Now there is more room for maneuver, for negotiations,” said Westphal at the German Institute for International and Security Affairs. “With a less confrontational policy, more common solutions can be found.”