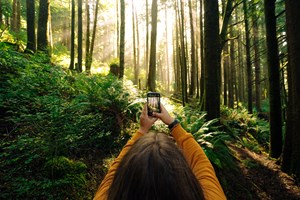 Carbon offsets are a key tool for corporations to meet climate goals.

SAN FRANCISCO (Bloomberg) --Following concerns that it is facilitating the sale of meaningless carbon credits to corporate clients, the Nature Conservancy says it’s conducting an internal review of its portfolio of carbon-offset projects. The nonprofit owns or has helped develop more than 20 such projects on forested lands mostly in the U.S., which generate credits that are purchased by such companies as JPMorgan Chase & Co., BlackRock Inc., and Walt Disney Co., which use them to claim large reductions in their own publicly reported emissions.

The self-examination follows a Bloomberg Green investigation last year that found the world’s largest environmental group taking credit for preserving trees in no danger of destruction. The internal review is a sign that it’s at least questioning some practices that have become widespread in the environmental world, and could carry implications for the broader market for carbon credits.

While the Nature Conservancy declined to answer specific questions about the review, it said in a statement that it aims to meet the highest standards with its carbon projects and that the inquiry will be led by scientists and a “team of experts with deep project knowledge.”

Selling credits for well-protected trees potentially undermines the sustainability efforts of some of the world’s biggest companies. Each carbon offset is supposed to represent the reduction of one ton of planet-warming emissions that would have otherwise spewed into the atmosphere without intervention. Around the world, a wide variety of offset projects do everything from protect mangrove forests to destroy heat-trapping gases from landfills and coal mines. But offset payments channeled to already safe ecosystems don’t fundamentally change the amount of carbon dioxide in the atmosphere.

“The way the Nature Conservancy has gone about this is unconscionable,” says Charles Canham, a forest ecologist at the Cary Institute of Ecosystem Studies and a longtime board member of a local chapter of the Conservancy. Canham reached out to staff members at the Conservancy days before Bloomberg’s article was published in December to urge a different approach to carbon offsets. One of his key concerns is how the nonprofit calculates the number of credits it sells.

Every offset project is measured against a so-called “baseline scenario,” an estimate of what would have happened in the absence of carbon revenue. For forest offsets, the difference between the existing trees and the theoretical trees in the baseline scenario determines the amount of carbon credits that get to be sold.

But lax rules have allowed project developers to make unlikely claims that huge numbers of well-protected trees were going to be cut. In the case of the Conservancy, many of its projects claim the forests would have been harvested aggressively—much as a commercial timber company would do—in the absence of carbon payments. While this allows the nonprofit to sell more carbon credits, Canham says it doesn’t realistically reflect how a conservation group would manage its land.

“In a sense, you’re giving a polluter a license to emit a very large quantity of pollution based on these things,” says Canham, who says he will step down after 24 years on the board of the Conservancy’s Adirondack chapter unless the nonprofit “radically changes” its approach to carbon projects.

In its written statement, the nonprofit defended its existing projects, which it said have been verified by third-party reviewers and comply with requirements established by nonprofit registries that supervise offsets. “As our understanding of climate change science and policy evolves, changes, and grows, we strive to ensure our projects do the same so we can achieve our goals for a low-carbon future,” the group said.

Carbon offsets have become an increasingly common way for businesses to claim large reductions in their emissions. In 2020, companies purchased more than 93 million carbon credits, equivalent to the pollution from 20 million cars in a year. That’s a 33% increase over 2019, according to clean-energy research firm BloombergNEF. The market is poised to grow sharply in the coming years as heavy emitters such as Royal Dutch Shell Plc, Delta Air Lines Inc., and JetBlue Airways have vowed to negate pollution by acquiring more carbon offsets. Mark Carney, the former Bank of England governor who is an organizer of this year's COP26 climate talks in Glasgow, Scotland, has said that the global market for carbon offsets can be expected to grow to $100 billion in the decades ahead.

Even though this money sometimes flows to organizations that do good works—including the Conservancy, which has protected more than 125 million acres since its founding 70 years ago—experts say carbon projects that take credit for activity that was already occurring are meaningless and undermine the credibility of the entire market.

“Carbon offsets are not a donation to a nonprofit group, it’s a purchase of a product,” says Eli Mitchell-Larson, a University of Oxford climate researcher and co-author of the Oxford Offsetting Principles, which provides guidance for how offsets should be used by companies with zero-emission targets. “The purchaser is getting the ability to say they’ve neutralized one ton of their emissions.”

While Mitchell-Larson applauds conservation groups for protecting and restoring lands, he says they hinder the world’s response to climate change when they sell offsets on land that was going to be preserved anyway. “One of my frustrations is the slowness of some conservation groups to take seriously the credibility of carbon claims they are making,” he says.

The Conservancy isn’t the only environmental group selling offsets from acreage it didn’t intend to harvest. For instance, in the swampy tidal region of South Carolina, the National Audubon Society has been preserving an ancient forest since 1970. Some of the towering cypress trees have stood for more than 1,000 years. On its website for the sanctuary, known as Beidler Forest, Audubon describes a “pristine ecosystem untouched for millennia.”

In 2013, Audubon began selling carbon credits from this natural sanctuary, with the project’s documents describing a rapacious baseline scenario of “clearcuts and thins.” The majority of its trees would have been felled within 25 years in the absence of carbon payments, stated the documents.

In reality, nothing of the sort would have happened, according to Norman Brunswig, who helped launch the carbon project and managed the sanctuary for Audubon for decades before retiring a few years ago. “We never intended to cut that forest,” he says.

Brunswig says the project has done some good because it contractually guarantees the trees will remain standing. This could prevent future generations of Audubon leaders from cutting the trees if they were to face a financial emergency. “Not that I ever thought it would happen,” he says. “But you take what was remotely possible and you make it impossible.”

This benefit described by Brunswig—locking in climate benefits from carbon-rich lands—is one of the offset industry’s most common arguments. “Unexpected events can occur,” says Joshua Strauss, vice president at Bluesource, a developer of environmental projects that helped put together the Beidler carbon deal. Strauss points out that about 4 percent of private timberlands in the U.S. change ownership each year, which can mean a change in how forests are managed.

“If we can really lock up those carbon stocks, that is meaningful,” he says.

But preventing unlikely clearcuts that might happen only decades from now is a minuscule climate benefit compared to the grandiose claims being sold. Companies are buying the right to claim they’ve reduced hundreds of thousands of tons of emissions today.

In the case of Beidler, the project has netted Audubon more than $3 million by generating nearly 900,000 credits—allowing buyers to erase from their ledgers the equivalent carbon pollution from 190,000 cars in a year. Disney has acquired some of the credits in its quest to cut its greenhouse gas emissions by half. Interface, a flooring company, has used the credits to describe some of its products as carbon neutral. Disney and Interface both declined to comment.

Audubon said the project was a way “to learn more about the nascent California carbon market,” according to spokeswoman Robyn Shepherd. While Audubon has contemplated carbon projects on some of its additional sanctuaries, Shepherd notes that the nonprofit hasn’t moved forward with any other projects.

Plenty of others are selling carbon credits for trees that are unlikely to be felled. This includes hunting clubs that need the habitat for wildlife and universities that use their forests for classes and workshops.

Even Ted Turner, the business mogul and founder of CNN, appears to be seeking carbon payments for well-preserved lands. Turner has been buying up huge swaths of wilderness for decades. On some of these lands he’s launched a network of eco-tourism resorts with hunting, fishing, and birdwatching. Soon there will be new revenue: Turner’s eco-tourism property in northern New Mexico, dubbed Vermejo, has informed a carbon registry that it plans to sell carbon credits.

While details of the project haven’t been released, it would be difficult to argue that carbon revenues persuaded a conservation-themed resort to stow its chainsaws and save its forests. A preservationist ethos is stated clearly on the website for Ted Turner Reserves: “We are committed to restoring, sharing and safeguarding America’s wild places for future generations.” A spokeswoman for Ted Turner Reserves said the Vermejo carbon project is “fairly new” and declined to comment further.

At the Nature Conservancy, meanwhile, the internal review will have to address a number of projects seeking carbon payments for similarly well-protected lands.

Take the thousands of acres of hardwood forest at Cypress Island in southern Louisiana that the Conservancy received as a donation from the oil company Texaco beginning in the 1990s. The gift was made “as a qualified conservation contribution pursuant to Section 170(h) of the Internal Revenue Code,” according to a 2001 agreement between the nonprofit and the company. This indicates that Texaco, which was later acquired by Chevron Corp., sought a federal tax deduction.

After taking care of the land as a nature preserve for over two decades, the Conservancy last year filed paperwork to sell carbon credits from the trees on Cypress Island—even though any effort to aggressively cut trees would appear to run counter to the intent of Texaco’s contributions and any federal tax breaks conveyed to the company. “It would seem to be exploitive,” says Mark Cook, lead tax partner at Los Angeles-based accounting firm SingerLewak.

The Conservancy said the Cypress project is still undergoing verification and hasn’t yet sold any credits, while declining to answer further questions.

Charles Canham, the forest scientist and Conservancy chapter board member, is holding onto hope that the nonprofit will set a higher standard for others to follow. But he realizes this would mean walking away from millions of dollars that might support important work. “These deals bring an awful lot of money to the table,” he says. “But it comes at a cost of pretending that they have a meaningful climate-mitigation effect.”