Yemen’s rebels are ready for peace with Saudis, with a few conditions 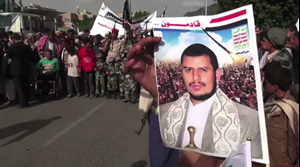 (Bloomberg) --Yemen’s Iran-backed Houthi rebels are ready for an “honorable peace” but Saudi Arabia must end its attacks and lift its siege, group leader Abdul Malik al-Houthi said on Thursday.

“We’re ready for peace, but we cannot compromise on our people’s right to freedom, independence, dignity or their legitimate rights to the delivery of fuel products and humanitarian needs,” he said in a speech to mark the sixth anniversary of the start of a Saudi-led coalition’s bombing campaign in Yemen. “We’re not the attackers. We’re being attacked.”

The speech was al-Houthi’s first official statement after a peace plan proposed by Saudi Arabia on Monday. The kingdom intervened in Yemen’s civil war in 2015 in an attempt to restore the internationally-recognized Yemeni government and counter the influence of regional rival Iran.

U.S. President Joe Biden has pushed for an end to the war -- which has devolved into the world’s worst humanitarian crisis and brought the poorest Arab country to the brink of famine -- and Saudi Arabia is also keen to exit the conflict. But analysts say that as the Houthis make military advances on the ground, they appear less willing to compromise.

As well as a comprehensive cease-fire under United Nations supervision, the Saudi peace plan called for depositing taxes and customs revenue from ships carrying oil to Hodeidah port into a joint account of the central bank, reopening the international airport in the Yemeni capital Sana’a, and the start of UN-mediated peace talks.

The Houthis, who now control Sana’a and swaths of the country, have repeatedly said that they will not agree to talks unless Saudi Arabia lifts an air and sea blockade that’s compounding rising starvation and implements a full cease-fire first. Saudi officials say there is no blockade.