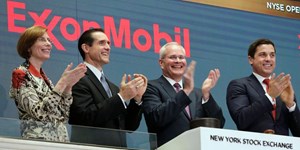 ExxonMobil CEO Darren Woods was among the CEOs pledging to assist the Biden administration with its climate initiatives.

WASHINGTON (Bloomberg) --Chief executives of some of the largest U.S. oil companies promised to collaborate with the Biden administration in its campaign against climate change during a meeting Monday with White House National Climate Adviser Gina McCarthy.

The oil industry leaders pledged support for federal regulations explicitly limiting emissions of methane from wells and other oilfield equipment -- a declaration that dovetails with President Joe Biden’s vow to clamp down on leaks of the potent greenhouse gas.

They also cheered the U.S. return to the Paris climate agreement and urged greater government support of carbon-capture and hydrogen technology that can help the country fulfill new carbon-cutting pledges set to be unveiled next month, according to two people familiar with the session that was conducted over Zoom.

McCarthy underscored how Biden’s “plans to tackle the climate crisis are centered around propelling our equitable economic recovery, positioning America to win the 21st century and creating millions of good-paying, union jobs directly in American communities,” the White House said in a statement after the session. “She made clear that the administration is not fighting the oil and gas sector, but fighting to create union jobs, deploy emission reduction technologies, strengthen American manufacturing and fuel the American economy.”

The meeting, which included executives from three industry trade groups and 10 oil companies -- including Exxon Mobil Corp., BP Plc, ConocoPhillips, Royal Dutch Shell Plc, Chevron Corp. and Devon Energy Corp. -- was the first of its kind since Biden’s inauguration in January. It comes after he imposed a moratorium on the sale of oil and gas leases on federal land, and as his administration prepares to unveil a new emission-reduction goal next month as part of the U.S. return to the Paris climate agreement.

The meeting was described as pleasant, without the kind of acrimony that colored some of the oil industry’s exchanges with former President Barack Obama’s administration. The format did not allow for a deep, back-and-forth dialogue. Instead, McCarthy opened the meeting, followed by remarks from Laura Daniel-Davis, the Interior Department’s principal deputy assistant secretary for land and minerals management, and each of the industry participants. Dave Lawler, the chairman of BP America Inc., kicked off their comments.

Almost of all of the executives in the virtual session made a pitch for putting a price on carbon dioxide emissions -- a policy shift they said could trigger greater investment in emission-reducing technology while fostering more certainty for energy companies. The American Petroleum Institute is considering endorsing a carbon price, which could take the form of an emissions-trading program or a tax on heat-trapping greenhouse gases.

“Our industry regularly engages with all levels of government and wants to ensure that policy makers in Washington understand that we can achieve our shared goal for a low-carbon future while strengthening American energy leadership and supporting the nation’s economic recovery,’ said API President Mike Sommers in an emailed statement. “We are committed to working with the White House to develop effective government policies that help meet the ambitions of the Paris agreement and support a cleaner future.”