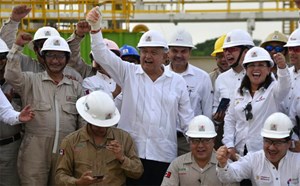 MEXICO CITY (Bloomberg) --Petroleos Mexicanos discovered what’s expected to be a billion-barrel oil field in Tabasco as it aims to reverse a decade and a half of sinking production.

The new field at the southern part of the Gulf of Mexico, when combined with nearby deposits, is similar in size to other billion-barrel discoveries, Pemex CEO Octavio Romero Oropeza said in an interview with Jenaro Villamil, head of Mexico’s state-owned broadcasting system, on Sunday night.

“It’s a gigantic field,” said Romero, comparing it to the recently discovered gas and condensate fields Quesqui, with 900 million barrels of oil equivalent, as well as Ixachi, with 1.9 billion. He said that Pemex will provide more details about the discovery on March 18, the nationally celebrated anniversary of Mexico’s 1930s expropriation of oil companies.

By most measures, the state-owned oil company is worse off than at any time in its nearly 83-year history. Its output has fallen sharply since the early years of this century and its debt -- at $113 billion -- is the highest of any major oil company. Its strategy to turn around production has failed to impress investors, and its bonds have been downgraded to junk by Fitch Ratings and Moody’s Investors Service Inc. 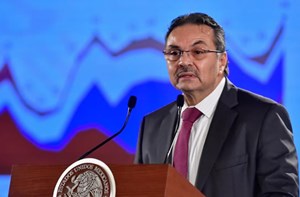 Pemex is under pressure to prove that the company is increasing production under the government of President Andres Manuel Lopez Obrador, who swept into power in late 2018, promising to revive it by rolling back the liberalizing energy reforms of his predecessor.

Romero said that the state oil giant never stopped producing last year. Critics questioned whether that was the best strategy for 2020, given that demand plunged, suppliers’ payments had to be delayed and the pandemic made Pemex one of its biggest victims. As many as 502 employees and contractors have died from Covid-19 complications, one of the highest death tolls of any company in the world.

“The decision not to stop was very important because we didn’t lose the momentum,” said Romero.