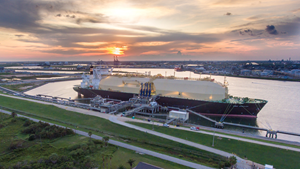 (Bloomberg) --Asia’s emergence as global natural gas trading superpower will increasingly dictate market rates in Europe for a once-localized commodity that was simply linked to the price of oil.

The change was highlighted this winter, when freezing temperatures in the northern hemisphere meant liquefied natural gas tankers went to Asia, the biggest consumer of the fuel and where sellers could get record-high rates. That pushed up market levels in Europe and, conversely, is now acting as a price brake as winter ends and LNG supplies return to the region.

Even with its numerous pipeline-supply options, Europe’s import dependency is rising amid falling domestic production due to aging fields in the North Sea. At the same time, trade in LNG transportable across oceans is expanding faster, driven mainly by demand in Asia.

In coming years, Europe will have to compete for LNG with consumers in China, India, Pakistan and Bangladesh. In addition, new markets are yet to open as some Asian nations are just starting to use gas in power generation instead of more polluting coal and fuel oil. By contrast, Europe’s tightening climate targets will lead to more renewables squeezing out gas.

“You can compare it to the coal market,” Sommer said. “Asia was always an anchor for European coal prices. The situation is moving into the very same phenomenon in the gas market as well.”

LNG production is rising primarily in nations relatively close to Europe, such as the U.S. and Russia. But the addition of new plants in regions closer to Asian buyers has now slowed, a factor seen boosting the interconnectedness of gas markets worldwide.

“The susceptibility of UK and European gas markets to global LNG prices may be set to increase,” according to energy consultant Cornwall Insight. “With no concrete plans for new long-term storage facilities in the UK and declining UK Continental Shelf, it could point to a greater LNG dependency in the coming years.”

This past winter’s LNG price volatility may be a taste of things to come. The super-chilled fuel is becoming such a global commodity as trade mechanisms evolve, that it’s now dictating natural gas prices, according to Christoph Merkel, managing director of the Merkel Energy consultancy in Germany.

“LNG prices have become the gas market prices,” he said. “There are still some hub prices, but LNG is now the market’s driver.”