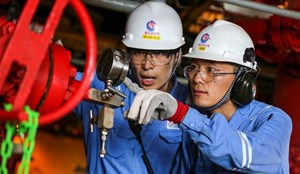 (Bloomberg) --China is gorging Iranian oil even as other nations wait for U.S. President Joe Biden to remove sanctions on the Islamic Republic.

Crude shipments from Iran to the province of Shandong, home to a quarter of China’s refining capacity, have surged so much this month they’re causing congestion at ports and filling up storage tanks, according to traders and analysts.

Chinese imports of Iranian crude will hit 856,000 barrels a day in March, the most in almost two years and up 129% from last month, said Kevin Wright, a Singapore-based analyst with Kpler. His figures take into account oil that’s undergone ship-to-ship transfers in the Middle East or in waters off Singapore, Malaysia and Indonesia to obscure their origin.

Most refiners and traders are reluctant to purchase Iranian crude for fear of repercussions that can include being cut off from the American banking system and having cargoes seized by the U.S. Tehran has used aggressive marketing as it tries to increase export income and boost an economy reeling from the sanctions.

The waiting time for tankers looking to offload in Shandong was estimated at 12 days last week, compared with eight the week before, according to Kpler. Oil inventory levels at ports in the province climbed to a one-year high last month, data from SCI99 showed.

Iranian cargoes are heavily discounted due to the sanctions putting off most buyers around the world. In China, their price is usually between $3 and $5 barrel below benchmark Brent crude, according to traders, who say it’s prompting local companies to stock up as global prices rise.

Tensions between Washington and Tehran have risen since Biden’s predecessor, Donald Trump, pulled the U.S. out of a nuclear accord with Iran in mid-2018 and tightened sanctions. Iran’s oil exports have cratered since them from around 2.5 million barrels a day. It still produces roughly 2 million barrels a day, but most of those are used domestically.

Frictions have remained high since Biden came to power in January. Still, Iranian President Hassan Rouhani this week said his country was ready to revert to full or partial compliance with the nuclear deal if the U.S. did the same. His government has repeatedly said the Americans should lift the sanctions before the two sides start talks.

Brent prices have leapt since November to more than $65 a barrel as major economies roll-out coronavirus vaccines. They briefly topped $71 a barrel this week after a drone and missile attack on Saudi Arabia’s largest oil export terminal, which the kingdom blamed on Yemen’s Iran-backed Houthi rebel group.

The rise in prices has caused importers such as India to call on the OPEC+ cartel of exporters to increase production.

In China, fuel consumption has already recovered to pre-pandemic levels. It’s continuing to grow on the back of strong factory activity and infrastructure building that left the capital, Beijing, blanketed in smog this week.

China’s imports of crude oil climbed to an average of 11.1 million barrels a day in January and February, up more than 20% from December, according to Bloomberg calculations.