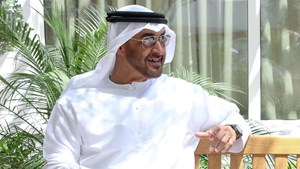 (Bloomberg) --Abu Dhabi’s de facto ruler, Crown Prince Mohammed Bin Zayed, has cemented his control over the emirate’s state energy company by becoming chairman of a newly-established board of directors.

The crown prince also appointed one of his sons, Khaled bin Mohamed bin Zayed, as chairman of a smaller six-member executive board at Abu Dhabi National Oil Co., according to tweets on Sunday from the emirate’s media office.

ADNOC pumps almost all the oil and gas in the United Arab Emirates, the third-biggest crude producer in OPEC.

“This formalizes the crown prince’s role as the head of ADNOC, which had been the case for several years,” said Robin Mills, founder and head of Dubai-based consultancy Qamar Energy. “It provides an important role for his son.”

Sultan Al Jaber, ADNOC’s chief executive officer, has been given the additional title of managing director and will sit on both boards.

The decision comes after Abu Dhabi in December merged the Supreme Petroleum Council, which used to set the government’s energy policy, with a new Supreme Council for Financial and Economic Affairs. Most of the ADNOC board members were on the SPC.

The creation of the 11-member wider board was made at the behest of Sheikh Khalifa Bin Zayed, president of the UAE and the crown prince’s brother. The crown prince has largely run the country -- a federation of seven emirates including Abu Dhabi, the capital -- since 2014, when Sheikh Khalifa had a stroke.