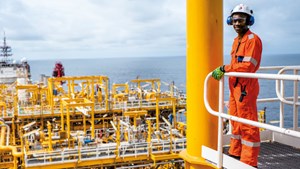 (Bloomberg) --The decline of Angola, from being Africa’s top crude producer five years ago to barely pumping more than war-torn Libya today, shows the heavy toll of a slump in oil-industry investment.

The nation’s production has fallen by more than a third since 2015, when international oil companies started slashing investment in response to a plunge in crude prices. Despite government efforts to stimulate activity, just a handful of drilling rigs now work in the deep Atlantic waters that hold the country’s greatest resources.

The situation could worsen as Big Oil makes another round of deep spending cuts, raising the possibility that Nigeria -- another key OPEC member -- could also suffer Angola’s fate. That would have consequences both for the oil market, which needs more supply from the cartel in the coming years, and the economic stability of a region that’s dependent on petroleum revenue.

“It’s a struggle for West Africa to compete” when investment is scarce, said Gail Anderson, principal analyst for West Africa upstream oil and gas at Wood Mackenzie Ltd. in Edinburgh. When returns are compared to other oil provinces, “Nigeria doesn’t stack up, nor does Angola.”

Angola’s oil production figures tell a bleak picture, especially for an economy that’s heavily dependent on petroleum exports. Crude output has held at a 15-year low of just below 1.2 million barrels a day since November, according to data compiled by Bloomberg.

Even Libya, where the oil industry has been crippled by a decade-long civil war, pumped more crude than Angola in December.

The seeds of this decline were sown in 2014, when surging U.S. shale production caused a price slump. As Brent crude fell from above $100 a barrel to less than $30 within a couple of years, international oil companies slashed spending around the world.

Deep production cuts by the Organization of Petroleum Exporting Countries and its allies eventually spurred a rebound in prices, but offshore drilling in West Africa recovered far more slowly. Then the coronavirus pandemic triggered another deep plunge in oil prices, leaving just a single drillship operating in the waters off Nigeria and Angola by the middle of 2020, according to data from Baker Hughes Inc.

“Exploration investments in Angola had been on decline since the 2014 downfall,” said Siva Prasad, senior upstream analyst at Rystad Energy AS. Some subsequent offshore projects by Eni SpA and Total SE kept the stream from drying up completely, but the global pandemic and market downturn “forced almost every oil and gas corporation to return its operations and spending plans back to the drawing board.”

Angola has tried to slow the decline through a broad effort including auctions of new drilling areas and the restructuring of state-owned oil company Sonangol.

The government negotiated with companies to see if they could squeeze “a little bit more” from existing fields, according to Angolan Minister of Resources and Petroleum Diamantino Pedro Azevedo. Even with that effort, the country is targeting average production of 1.22 million barrels a day for 2021, which would mean it is unable to enjoy the benefits of a higher OPEC+ output quota as the cartel opens the taps later this year.

Angola is largely dependent on deep-water fields, where the natural decline in output is typically faster than onshore. Without constant investment to improve oil-recovery rates or tap additional reservoirs, production can drop rapidly.

In Nigeria, about two-thirds of production comes from shallow-water and onshore fields, where output had recovered prior to the Covid-19 pandemic as unrest in oil-producing areas eased.

The country cut production sharply last year as part of the OPEC+ deal. Crude shipments last month fell to the lowest level in four years and output was below 1.5 million barrels a day. That’s less than half of the longstanding target it planned to reach in 2023, and deep-water drilling could potentially be “the engine of growth” for Nigeria in the years ahead, according to Wood Mackenzie’s Anderson.

Oil prices have mostly recovered from the historic slump caused by the coronavirus pandemic, with Brent crude rising above $65 a barrel in London. When major companies do start to spend again, fiscal terms will be crucial in determining whether Nigeria can boost investment, or share the fate of Angola.

But Nigeria increased the royalty for deep water in 2019. Companies including Total, Royal Dutch Shell Plc and Exxon Mobil Corp. have voiced concerns that the long-delayed Petroleum Industry Bill could deter investment.

“The problem for Angola is that there deep water production was already maturing and steeply declining and improved fiscal terms are not going to change the overall picture,” Anderson said. “Nigeria on the other hand has more choice and clearly could produce more if it got the fiscal and regulatory framework right.”