(Editor’s note: What follows is a combination op-ed/analysis piece from the largest oil and gas producers’ association in Texas) 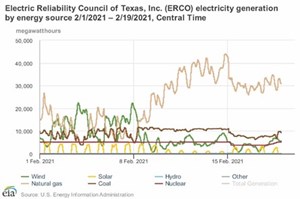 The brutally cold temperatures that hit the State of Texas, beginning on Feb. 14 and lasting through this past week—thanks to Winter Storm Uri—resulted in the inability of the ERCOT (Electric Reliability Council of Texas) grid to provide enough power to keep electricity flowing for household and commercial use. As a result, rolling blackouts were implemented, to try to bring usage down to the available levels of power being supplied.

In some locations, these blackouts were short, with only one or two occurrences, while in others, power remained out for days. These matters will be under investigation in the weeks ahead, and much light will be shed on the events of the past week.

People looking for scapegoats. For now, however, proponents of expanded renewable forms of energy (and opponents of fossil fuel energy, including petroleum) have taken this catastrophe as an opportunity to demonize natural gas, suggesting that falling natural gas supplies were the primary source of the loss of power supply.

While it is true that the number of megawatt hours generated by natural gas declined on Feb. 16 and 17, the volume of natural gas power supplied, leading up to that, had more than tripled, compared to the volumes before the cold temperatures set in during the previous weekend. At the same time, natural gas delivery for residential use (home heating, primarily) was spiking upward, as well.

RRC tried to help. In fact, the Texas Railroad Commission (RRC) issued an emergency order on Feb. 12, prioritizing natural gas disposition. At the top of their list was natural gas distribution for home heating, while electric power generation for “human needs” was second on the list. The prioritization of gas usage for residential use clearly diminished the volume of natural gas available for power generation. 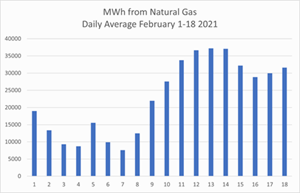 Also, providing electric power for oilfield operations is not classified as a “human need,” and as power was lost in the field, the ability to continue to produce and process gas for human needs was significantly diminished. In short, natural gas did the heavy lifting in two respects this past week—heating homes and generating large volumes of electric power. As it turns out, it wasn’t enough to meet the huge upward spike in demand, largely because electric power from wind generation was nowhere to be found.

Two great articles on this subject can be found here and here.