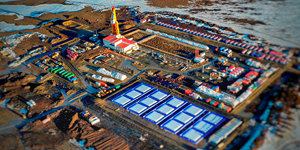 (Bloomberg) --Trafigura Group’s purchase of a stake in Rosneft PJSC’s flagship Arctic oil project was funded by a $7 billion loan organized by a Russian bank, according to documents that shed new light on the trading house’s biggest-ever deal.

The two companies last week said they had completed a deal for a 10% stake in Vostok Oil, without providing a value. Trafigura had said the purchase had been “majority financed by long-term debt,” but didn’t name the lenders.

According to corporate filings in Singapore, which haven’t previously been reported, the trading firm agreed to a 5.775 billion-euro ($7 billion) loan facility with Credit Bank of Moscow PJSC on Dec. 23.

The documents offer the first official indication of the scale of Trafigura’s bet on the sprawling project, which Rosneft Chief Executive Officer Igor Sechin has said could produce 1 million barrels of oil a day by 2027. The investment runs counter to the reluctance among many Western majors and investors to back big new oil projects, especially in environmentally fragile areas like the Arctic.

In addition to the loan for a fully owned Trafigura entity CB Enterprises Pte Ltd., through which it bought the stake, the trading house invested a small amount of its own funds, according to a person familiar with the transaction, who asked not to be named discussing sensitive information.

That implies that the deal was worth more than $7 billion -- making it Trafigura’s largest ever acquisition by far -- and valuing the 10% stake in Vostok Oil at roughly the same level as the book value of Trafigura itself. It also suggests a valuation of $70 billion for the whole project -- at the upper end of most analysts’ estimates, and more than Rosneft’s entire market capitalization of $62 billion.

A Rosneft spokesman said that the deal was “a logical extension” of its cooperation with Trafigura and would give the trading house “long-term access to high quality hydrocarbons to be produced with a low-carbon footprint that can be shipped both to the west and east.”

The purchase price has been fully paid by Trafigura, he said, adding that “Rosneft has no pecuniary obligations” to CB Enterprises arising from the deal. Credit Bank of Moscow declined to comment.

It’s not the first time a commodity trading house has bought a valuable slice of Russia’s natural-resource wealth using money from the country’s own banks. In 2016, Trafigura’s rival Glencore Plc joined forces with Qatar’s sovereign wealth fund to buy an $11 billion stake in Rosneft itself in a deal backed by Russian banks that only involved 300 million euros of its own money.

That deal proved to be short-lived, as Glencore later divested most of the stake to a Qatari investment fund.

If Trafigura holds on to its investment in Vostok Oil, it would become a major oil producer at a time when many western investors and companies are shying away from new projects. And it would buck a trend among major oil explorers to shun Arctic drilling amid pressure from environment campaigners trying to save one of the few pristine areas of the planet.

Analysts at Bank of America Merrill Lynch have described the Vostok Oil project as one of the largest oil developments globally in decades, saying it “could rival in scale the oil developments of West Siberia and Volga Urals regions in the 1960s.” Those have helped Russia pump billions of barrels, making it one of the world’s biggest producing countries.

Just as in Glencore’s 2016 deal, Trafigura’s risk is limited, according to the person familiar with the deal. The loan facility from Credit Bank of Moscow is secured by the stake in Vostok Oil and is non-recourse to Trafigura, the person said.

Credit Bank of Moscow, a mid-sized lender which has expanded in recent years partly through its dealings with Rosneft, has syndicated the loan to a consortium of banks, the person added, declining to say whether there were any non-Russian banks in the group.

Also like Glencore’s 2016 deal, part of the prize for Trafigura appears to be trading contracts with Rosneft. Further filings for CB Enterprises show it has agreed new crude oil and products offtake contracts as part of the deal.