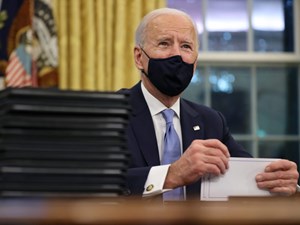 “These executive orders follow through on President Biden’s promise to take aggressive action to tackle climate change and build on the executive actions that the resident took on his first day in office,” the White House says in a fact sheet on the moves released Wednesday.

Much of the action has been telegraphed previously and builds on promises Biden made on the campaign as part of his bid to make the U.S economy carbon neutral by 2050. It’s not clear he’ll be able to do everything unilaterally.

For instance, Biden is directing federal agencies “to eliminate fossil fuel subsidies as consistent with applicable law,” and instead, seek “new opportunities to spur innovation, commercialization and deployment of clean energy technologies and infrastructure,” according to the White House.

However, while the Biden administration has some latitude to shift some funding for innovation at the Energy Department, abolishing tax incentives that support fossil fuel development, such as deductions for intangible drilling costs, would require action by Congress.

Still environmentalists were cheering the move as the boldest action by a president yet to confront the climate crisis and the fossil fuels that drive it.

“The era of putting polluters’ profits first is over,” said Josh Axelrod, senior advocate for the nature program at the Natural Resources Defense Council. “We can’t lock our children and grandchildren into decades more of the dirty fossil fuels of the past, and all the hazards and harms they bring to our public lands, oceans and coastal communities.” 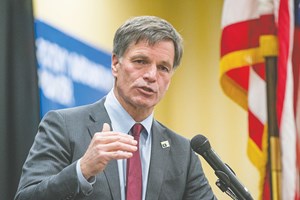 Supporters of the fossil fuel industry said jobs would be lost. Wyoming Governor Mark Gordon, a Republican, said the president’s moves “will divide and alienate the very working-class American communities with whom the Biden administration has pledged to unite.”

“It is clear President Biden has caved in to a loud segment of the Democratic Party that is pushing to require all policies and decisions to meet a litmus test of climate change, regardless of consequence,” Gordon said in an emailed statement. “There are bipartisan solutions available that support the people working in oil and gas on federal lands as well as reduce carbon emissions.”

Biden’s order directs federal agencies to buy electric and other zero-emission vehicles and renewable power as a way to “leverage the federal government’s footprint and buying power to lead by example,” according to the White House fact sheet. The U.S. maintains fleet of 645,000 vehicles and operates nearly 10,000 buildings, according to the General Services Administration.

Biden is also inviting world leaders to a climate summit on April 22 -- Earth Day -- in a sign of the new president’s commitment to not just rejoin the Paris climate accord but strengthen it. The president’s efforts Wednesday kick off work to develop a new, stronger U.S. carbon-cutting commitments well as a climate finance plan, according to the White House.

The president’s announcements come as his administration has made climate change one of its top priorities -- seeking to marshal the entire federal government to combat the crisis.

The work will be buttressed by new government commissions focused on climate, job creation and environmental justice. Biden will establish a climate-focused civilian conservation corps along the lines of the program created by President Franklin Delano Roosevelt during the Great Depression.

Biden is committing to conserve 30% of U.S. lands and waters by 2030 and revitalize communities that have borne the brunt of pollution. It is unclear what form those protections might take but conservation could involve designating areas as wilderness, refuges or national monuments -- and walling off industrial development or even hiking and other recreational activity.

Under the order, Biden is directing the Interior Department to pause entering into new oil and natural gas leases “to the extent possible, while looking for ways to double renewable energy production from offshore wind by 2030. Wind farms are already planned up and down the U.S. coast, pending the agency’s approval.

Still, it could deliver a big economic blow to New Mexico, North Dakota and other states with substantial oil and gas reserves on federal land. The effects on the oil industry also will be uneven, with the impact falling heaviest on producers with significant federal acreage, such as Devon Energy Corp. and Cimarex Energy Co. onshore and Murphy Oil Corp. offshore.