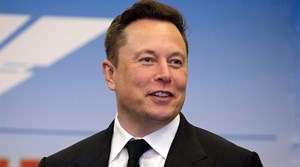 (Bloomberg) --Elon Musk recently moved to Texas, where he launches some of his rockets and is building a battery factory. Now, for good measure, he plans to drill for natural gas in the state.

The billionaire’s SpaceX intends to drill wells close to the company’s Boca Chica launchpad, it was revealed during a Friday hearing before the Railroad Commission of Texas, the state’s energy regulator.

Production has yet to start because of a legal dispute between the SpaceX subsidiary Lone Star Mineral Development and another energy company. Tim George, an attorney representing Lone Star, said at the hearing that SpaceX plans to use the methane it extracts from the ground “in connection with their rocket facility operations.”

While it’s unclear what exactly the gas would be used for, SpaceX plans to utilize super-chilled liquid methane and liquid oxygen as fuel for its Raptor engines. The company’s Starship and Super Heavy vehicles are tested at Boca Chica, and orbital launches are planned for the site.

Jeff Bezos and Elon Musk had competed for nearly a decade to develop engines and rockets through their privately owned space companies when the perk came their way in 2018. Their companies' sites were included among the thousands of tracts across the U.S. designated as Qualified Opportunity Zones.

George declined to answer further questions and hung up when called for comment. SpaceX didn’t immediately respond to a request for comment.

Musk said in December he relocated to Texas to focus on SpaceX’s Starship vehicle and Tesla Inc.’s new Gigafactory, which is being built near Austin. On Thursday, the billionaire tweeted that he plans to donate $100 million toward a prize for the best carbon-capture technology. His past comments have suggested that he wants to use the tech to produce synthetic carbon-neutral rocket fuel. Until then, fossil fuels will power SpaceX rockets.

Formed in June 2020, Lone Star bought the 806-acre (326-hectare) La Pita oil lease from Houston-based Sanchez Energy, which was later renamed Mesquite Energy Inc. after exiting bankruptcy. Financial terms for the deal weren’t disclosed, but the SpaceX subsidiary’s drilling plans have been called into question amid a dispute with Dallas Petroleum Group, which claims ownership of some inactive wells sitting on the same land.

That lawsuit prompted SpaceX’s land-acquisition arm Dogleg Park LLC to intervene in November. In a filing to the court, Dogleg said Dallas Petroleum locked SpaceX out of the property and asserted ownership claims for the “sole purpose of extorting money from SpaceX.”

Dallas Petroleum Group denies the allegations and maintains it has ownership of both the wells and the 24 surrounding acres.

During Friday’s hearing, Dallas Petroleum CEO Matt Williams shared aerial photos that he said showed company equipment near the wells had been disconnected, while drilling and hydraulic-fracturing gear it doesn’t own had been moved onto the property. His company, he added, was also given a trespass warning.

“Our signs are all over these tanks and the well head,” he said. “Any operation that went on there, we were very much liable for any problems that could have happened.”

The Brownsville court is due to hear the lawsuit on Feb. 9 while Railroad Commission Administrative Law Judge Jennifer Cook is likely to take months to propose a decision that will later be voted on by the agency’s three commissioners in a public hearing. Cook is expected to scrutinize Dallas Petroleum’s claims against property and tax records, which list Sanchez as owner of the disputed land.

The area around the SpaceX facility has seen limited oil and gas development. There are almost a nearby dozen wells classified as either abandoned or dry holes, Railroad Commission Records show. Canadian company Enbridge Inc. owns and operates the nearby Valley Crossing Pipeline, which moves 2.6 billion cubic feet of natural gas per day from the Eagle Ford Shale of South Texas to customers in Mexico.

The Brownsville region may see more energy investment in the years ahead. There are separate plans for three liquefied natural gas export terminals about 5 miles (8 kilometers) west of the launch site. Environmental reports for those projects say they could safely coexist with SpaceX, although some activists dispute those claims.