The Middle Eastern country will use carbon-capture technologies to create what’s known as blue hydrogen, Sultan Al Jaber, chief executive officer of Abu Dhabi National Oil Co., said at a virtual conference on Tuesday. Abu Dhabi is the UAE’s capital and holds most of the OPEC member’s oil and gas. 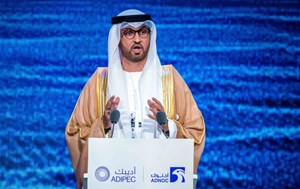 The UAE can be “one of the lowest-cost and largest producers of blue hydrogen in the world,” Al Jaber said Tuesday at the Abu Dhabi Sustainability Week online conference. There’s “no credible way” of meeting global climate goals without carbon capture and storage, he said.

Blue hydrogen is a form of the fuel created from natural gas in a process that stops the carbon emissions being released into the atmosphere. Adnoc currently has one project to capture, store and use carbon.

Energy producers are looking to hydrogen, which produces only water when burnt, as a cleaner way of generating power. The UAE is also investing in green hydrogen, which is produced using renewable energy, like solar power, that doesn’t emit carbon.

While hydrogen is seen as crucial for the transition from oil and gas to cleaner fuels, the technology to make it is still comparatively expensive.

Asia and Europe are potential markets for the UAE’s future exports of the fuel, Al Jaber said at a separate conference, also on Tuesday.

The UAE aims to cut its emissions by 24% by 2030 compared with 2016 levels, Al Jaber said. The nation is the first in the region to commit to an economy-wide reduction in emissions, he said.

While the country wants to shrink its carbon footprint, Adnoc has also earmarked billions of dollars to pump more oil and gas. There are opportunities for U.S. firms to help with that goal, Al Jaber said.

The government-run company will spend $122 billion over the next five years, partly to ramp up oil-production capacity to 5 million barrels a day by 2030, from around 4 million now. That plan is also intended to make the UAE self-sufficient in gas and covers the development of hydrogen. Al Jaber didn’t provide a separate investment figure for hydrogen or carbon-capture projects.