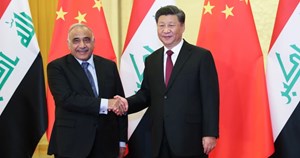 (Bloomberg) --Iraq has selected a Chinese company for a multibillion-dollar oil-supply deal, as the Arab nation seeks funds to bolster an economy reeling from the Coronavirus-triggered collapse in energy prices.

SOMO, which oversees Iraq’s petroleum exports, picked a Chinese firm after receiving bids from several traders, the official Iraqi News Agency reported, citing an interview with the head of SOMO, Alaa Al-Yasiri. While INA didn’t name the company or specify if Prime Minister Mustafa al-Kadhimi had signed off on the deal, Bloomberg reported last month that ZhenHua Oil Co., a subsidiary of China’s largest state-owned defense contractor, was the winner.

“There was intense competition between two European and Chinese companies, and the Chinese company won,” INA quoted Al-Yasiri as saying.

It’s the first time Baghdad has sought a prepayment deal, in which oil is effectively used as security for a loan. It’s also the latest example of China lending to struggling oil producers via state-controlled trading companies and banks.

SOMO offered to supply roughly 130,000 barrels a day of crude for five years, according to a letter it sent traders in November. It wanted upfront payment for one year of supply, which at current prices would bring in more than $2 billion, according to Bloomberg calculations. The winner gets flexibility in choosing when to ship the crude for a year, Al-Yasiri said. This mechanism was approved by the cabinet, he said.

A spokesperson for the prime minister didn’t immediately respond to a request for comment.

While all major oil exporters have taken a hit from the plunge in prices since March, Iraq is in one of the weakest positions. OPEC’s biggest producer after Saudi Arabia, its economy was forecast by the International Monetary Fund to contract 11% last year. The government weakened the dinar by almost 20% against the dollar in December -- the first devaluation since since the U.S.-led invasion in 2003 -- as its foreign-exchange reserves shrank.

Iraq’s woes make it harder for the government to raise money more conventionally through the bond market. The country’s dollar yields average 8.2%, one of the highest levels for any sovereign.

The oil-supply deal attracted widespread interest among major traders, according to people familiar with the matter. The contract will be one of the largest of its kind in recent history and it allows the winner to ship crude to wherever it wishes for a year. Normally, Middle Eastern crude is sold with strict clauses preventing traders and refiners from reselling the barrels to different regions.

“Iraq got $2 billion at zero interest with a premium over the price,” Al-Yasiri said. “The flexibility that Iraq has granted to companies is the freedom to determine the day of loading the shipments, the export destination, the possibility of resale.”

The Organization of Petroleum Exporting Countries is to meet Monday to assess production levels. While the 13-nation group has slashed output since April to buoy prices, Iraq has breached its quota on several occasions, angering Saudi Arabia.

While those cuts have boosted the price of oil, it still fell around 25% last year. Brent is trading at $51.80 a barrel, well below what Iraq needs to balance its budget.