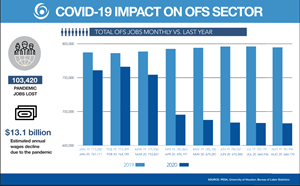 America’s oilfield services and equipment lost approximately 2,600 jobs in August, according to preliminary data from the Bureau of Labor Statistics (BLS), the lowest total since the onset of the COVID-19 pandemic in March. The U.S. economy added 1.4 million jobs in August and the unemployment rate fell to 8.4%.

The monthly Oilfield Services and Equipment Employment Report, compiled and published by the Petroleum Equipment & Services Association, shows total job losses due to pandemic-related demand destruction reached 103,420 in August. OFS employment is down more than 121,000 jobs since August 2019 and is at its lowest point since March 2017.

Using BLS data, PESA, in consultation with researchers from the Hobby School of Public Affairs at the University of Houston, estimates OFS sector jobs in the U.S. dropped from 764,189 in February to 660,170 in August, a decline of 13.5%. Losses were heaviest in April, totalling 59,306 jobs — the largest one-month total since at least 2013.

OFS job losses slowed in August as companies began taking steps to restart oil and gas production. While the worst of the cutbacks appear to be behind the industry, considerable uncertainty about the future remains because a surge in COVID-19 cases could derail the economic recovery and suppress demand.

According to PESA’s analysis, the following states have lost 4,000 or more OFS jobs in 2020:

OFS employment was estimated by analyzing data published by the U.S. Bureau of Labor Statistics and covers the economic activities of OFS companies, which include oil and gas extraction, construction and manufacturing. Total employment is estimated using the Quarterly Census of Employment and Wages, published by BLS, and jobs data reported by BLS monthly.

Note: BLS data is preliminary for the two most recent months. PESA updates its monthly totals according to BLS corrections.