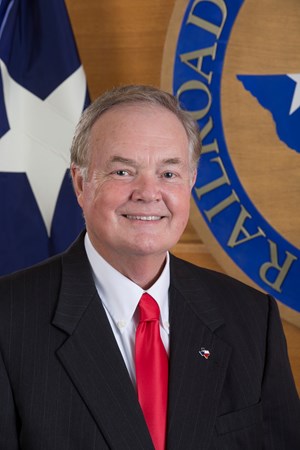 Never in my life have I seen such uncertainty in the world. What am I supposed to do? How long will it last? What will happen next? As COVID-19 wreaks havoc on our healthcare system and economy, there are no easy answers. American businesses and workers are justifiably worried about its impact on public health and the economy, and their own health and personal finances. As a result, people are suffering.

Over the last month, our stock market has gone from record highs to multi-year lows at an unprecedented pace. Stocks have dropped faster in recent weeks than they did during the Great Depression. In the energy sector, reduced demand and a poorly-timed feud between Saudi Arabia and Russia has driven oil prices to 20-year lows.

As the regulator charged with overseeing the oil and natural gas industry for the State of Texas, I am very concerned about the impact that international oil market instability has on the Texas economy, state budget, and the hundreds of thousands of Texans, who rely on the oil and gas industry for a paycheck.

Producing 40 percent of our nation’s oil and gas, Texas is the largest producer in the United States, and the United States is the largest producer in the world. This production provides jobs for more than 350,000 Texans, and it generated around $116 billion in taxes and royalties for our state in the last ten years.  These benefits could disappear overnight, if we do not find a solution that stabilizes the international energy market.

The matter of proration. One idea floating around is to “prorate” or limit the production of crude oil. The idea goes something like this: by limiting production, you limit supply; by limiting supply, you raise the price. If you want to raise the price further, limit supply further; if you want to lower the price, lower (or eliminate) production limits. It’s a crude (pun intended) attempt at price-fixing. My agency, the Railroad Commission of Texas, adopted “prorationing” in the late 1920s, but abandoned the practice nearly 50 years ago. The Railroad Commission has not prorated the production of crude oil since 1973.

As I stated last week, I have many reservations about prorationing crude oil production in Texas, particularly without enforceable commitments from other states and nations to limit their production by a similar amount. I am not alone in holding these concerns. The Texas Oil and Gas Association (TXOGA) and the American Petroleum Institute (API) recently issued statements that similarly echo my unease regarding prorationing.

Despite making relatively few and clear statements on my concerns regarding pro-rationing, my point of view on the matter has been greatly mischaracterized as out-right, hard opposition. Statements like "Christian poured cold water on Sitton’s plan," are factually incorrect and are made simply to imply a political battle between two Republican elected officials. The truth is, the idea was proposed by private industry, and Commissioner Sitton and I have not even spoken about this idea, due to restrictions in place as part of the Open Meetings Act. (Editor’s note: The Commission’s meeting scheduled for March 31 has been cancelled, due to the Coronavirus and restrictions on large gatherings).

What I am opposed to is Texas acting unilaterally and without concern for our producers and economy. Any action taken by Texas must be done in lockstep with other oil producing states and nations, ensuring that they cut production at similar times and in similar amounts.

Getting the word out. I have been in contact with the Department of Energy, the steering committee of the Interstate Oil and Gas Compact Commission, and several of our U.S. Congressmen to express the seriousness of this situation and the importance of moving quickly to find a solution. Much like it is in our nation's best interest to manufacture consumer goods and pharmaceuticals domestically, it is imperative for us to fight for the long-term future of our oil and gas industry, and the national security that comes along with it.

Since taking office, President Donald Trump has used his position to negotiate the best trade deals possible, putting America first. When asked about the current oil crisis, the President stated, “At the appropriate time, I’ll get involved.” Mr. President, I strongly urge you to act now. Now is the time. Our energy independence and national security depend on it.