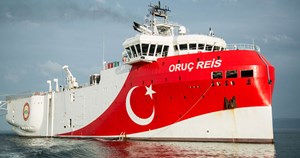 ANKARA (Bloomberg) --Turkey pulled an energy exploration ship from the eastern Mediterranean and emphasized its respect for non-Muslim minorities, in overtures to European leaders who’ll be pondering tougher sanctions on Ankara next week.

While warning against additional EU sanctions, Turkey has already signaled readiness for confidence-building measures and negotiations with Greece over territorial disputes, and recently sent an envoy to Brussels in an effort to de-escalate tensions.

European leaders have also pressed for greater tolerance in Muslim-majority Turkey toward other religions, and on Sunday, presidential spokesman Ibrahim Kalin and Justice Minister Abdulhamit Gul met with religious leaders and heads of foundations of non-Muslim minorities to assure them the government would work to resolve issues regarding their churches, schools and properties.

Among other things, the U.S. and EU have long pressured Turkey to reopen the Halki Theological School that trained generations of church leaders, including Patriarch Bartholomew I, the head of the Istanbul-based Greek Orthodox church. The school was barred from accepting new applicants in 1971, then shut down in 1985 after all remaining students graduated.

“Religious minorities are the wealth of our country, based on the principle of equal citizenship and common history,” Kalin said in a Twitter post, adding that discriminating against them would weaken Turkey.

So far, the EU has been reluctant to clamp down too hard on Turkish activities it considers contentious, because Turkey acts as a bulwark against a flood of refugees from the Middle East. In February, the bloc imposed asset freezes and travel bans on two employees of Turkish Petroleum Corp. in response to Turkey’s natural-gas hunt off Cyprus. A Cypriot proposal to expand that blacklist has been held up since June.

The December meeting was scheduled after Cyprus agreed in October to lift EU sanctions against Belarus over its contested presidential election -- but on condition the bloc debate a tougher stance against Ankara.

Turkey has since irked the EU further by reopening Varosha, a ghost town in the Turkish-controlled part of Cyprus, and hosting Erdogan there. The area had been abandoned and sealed off since Turkey’s 1974 takeover of northern Cyprus, following a coup attempt in which a military junta in Athens sought to unite the island with Greece.

Greece has called on Germany, Spain and Italy to stop exporting submarines, frigates and other military equipment to Turkey, which wants to develop its defense industry, preferably through cooperation with NATO allies. Ankara is pushing France to agree to joint production of Eurosam missiles and Germany to provide engine and transmission systems for Turkey’s first locally developed battle tank.

“There is still an attempt to get a response from German authorities regarding these permits,” Turkey’s Deputy President Fuat Oktay told a parliamentary committee on Friday. “If someone is going to impose an embargo on us, this just whips us up to produce our own power pack and it will have no other effect than that.”