KARACHI (Bloomberg) - Pakistan has given provisional permission to five developers, including partnerships with Exxon Mobil and Royal Dutch Shell, to set up LNG import terminals. 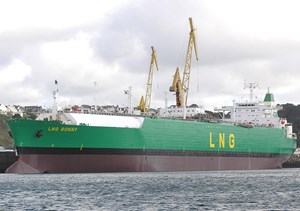 The developers are now required to submit technical and financial details by Nov. 5, as well as a $2 million concession fee, according to Ali Zaidi, minister for maritime affairs. Another $8 million will be paid on the signing of so-called implementation agreements.

“It’s a great opportunity for private investors to set up their own terminals, import their own gas and develop their own markets,’’ Zaidi said in a phone interview.

The government is requiring the terminals to be completed in two years, and for the operators to pay a royalty of $1.90 per ton, according to Zaidi. The companies are also required to disclose if they’re being investigated by any government authority.

According to Zaidi, the five prospective developers are: