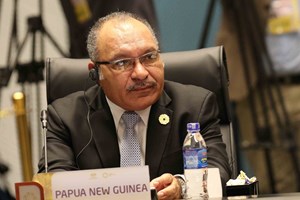 “Peter has been a passionate servant of his country,” Australian Prime Minister Scott Morrison told reporters on Sunday in Canberra. Morrison was looking forward to working with O’Neill’s replacement, he said, without confirming Chan’s appointment.

O’Neill’s resignation comes as he faced a potential no confidence vote after dissatisfaction over a recently signed natural-gas agreement with France’s Total SA sparked a wave of ministerial resignations. His government on May 7 adjourned parliament until May 28, averting the immediate threat of a no-confidence vote.

Recent movements in the parliament have shown a “need for change,” the ABC report cited O’Neill as saying.

The government had been under pressure to get a better deal from the expansion of liquefied natural gas projects, including those led by energy giants ExxonMobil Corp. and Total worth as much as $13 billion. That followed criticism from the World Bank and International Monetary Fund that the country’s original LNG project delivered its people only limited benefits.

O’Neill’s resignation is likely to raise questions about plans to expand the LNG industry.

The country’s political turmoil poses a risk to the goal of doubling LNG exports by 2025, Fitch Solutions said in a report earlier this month. Citing the need for more clarity, Fitch maintained its forecast “for PNG’s robust planned and proposed LNG project pipeline to be realized in full.”

“Peter O’Neill looks to be striving to keep his coalition in power with the move to cede leadership to Sir Julius Chan,” said Shane McLeod, a researcher who specializes in PNG at the Lowy Institute. “By offering up the PM’s post he is targeting high-profile provincial governors (who were formerly in the government) and challenging them to vote for the government’s candidate.”