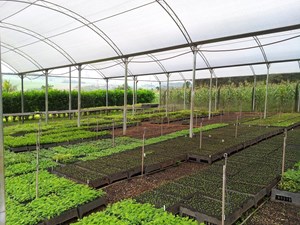 Photo: Tree seedlings being planted in a reforestation project.

THE HAGUE -- Shell has announced a program to invest in natural ecosystems as part of its strategy to act on global climate change, including addressing carbon dioxide (CO2) emissions generated by customers when using its products. Shell plans to invest $300 million over the next three years.

This program will contribute to Shell’s three-year target, beginning in 2019, to reduce its Net Carbon Footprint by 2% – 3%.

“There is no single solution to tackling climate change. A transformation of the global energy system is needed, from electricity generation to industry and transport,” said Ben van Beurden, CEO of Royal Dutch Shell.

“Shell will play its part. Our focus on natural ecosystems is one step we are taking today to support the transition towards a low-carbon future. This comes in addition to our existing efforts, from reducing the carbon intensity of oil and gas operations to investments in renewable sources of energy.”

Mark Tercek, CEO of The Nature Conservancy said, “Last year’s IPCC report was a wake-up call on climate: reducing emissions starts with fossil fuels. Shell’s announcement signals that one of the world’s biggest energy companies is pursuing a decarbonization strategy with a broad set of solutions, including by investing in nature. By doing so, it is helping to curb global deforestation, restore vital ecosystems, and help communities develop sustainably. Shell is the first in the industry to set near-term targets for the emissions of both its operations and its products; this is clear progress, but it also illustrates how much work remains to achieve Paris climate targets. We look forward to seeing further investment from Shell in these areas.”

On the road, Shell is making a wider range of transport solutions available to customers. The company is stepping up its investments in lower-carbon options, from battery electric vehicle charging to liquefied natural gas and hydrogen. For example, in Europe, customers can now access 100,000 electric vehicle charge points through New Motion, a Shell company. Today, Shell announces that it is also investing in 200 new rapid electric vehicle charge-points, powered by renewable energy, on its forecourts in the Netherlands, on top of 500 ultra-fast chargers being installed on Shell forecourts across Europe, in partnership with IONITY.

For customers who drive internal combustion engine vehicles, Shell is making it simpler for them to reduce their carbon footprint through low-carbon biofuels and carbon neutral driving.

From April 17th, customers who fill up at a Shell service station in the Netherlands will be able to drive carbon neutral through the use of nature-based carbon credits. This will be done at no extra cost for customers who choose Shell V-Power petrol or diesel, while those who fill up with regular Shell petrol or diesel can participate for an additional 1 cent a litre.
Shell will roll out similar choices to customers in other countries, starting with the UK later this year. This complements Shell’s existing program to help business customers avoid or reduce emissions, including supplying lower emission fuels and electric vehicle charging. Shell also offers businesses the opportunity to drive carbon neutral by compensating the CO2 emitted from driving their fleet.

CO2 emissions generated by participating motorists – as well as from the extraction, refining and distribution of the fuel – will be offset by carbon credits. As one of the most established traders of carbon credits in the world, Shell buys these credits from a global portfolio of nature-based projects, including Cordillera Azul National Park Project in Peru, Katingan Peatland Restoration and Conservation Project in Indonesia and GreenTrees Reforestation Project in the USA. Each carbon credit is subject to a third-party verification process and represents the avoidance or removal of 1 tonne of carbon dioxide.

At the same time, Shell also plans to invest at scale in forests, wetlands and other natural ecosystems around the world, to reduce emissions and capture more CO2 while benefiting biodiversity and local communities.

As a start, in the Netherlands, Shell and Staatsbosbeheer, the independent Dutch state forestry service, will plant more than 5 million trees over the next 12 years. “This collaboration enables Staatsbosbeheer to plant new trees in the forests following the death of ash trees affected by an aggressive fungal disease,” said Sylvo Thijsen, chief executive of Staatsbosbeheer.

Shell has also signed a deal with Land Life Company to create a 300-hectare reforestation project in Spain. Around 300,000 trees will be planted in the Castilla y Leon region by the end of this year. “We welcome Shell’s investment in high quality nature-based solutions to address climate change and rebuild critical ecosystems,“ said Jurriaan Ruys, CEO of Land Life Company. “Combined with a technology-driven approach, reforestation can now be achieved and optimized at scale, maximizing the impact of this investment.” The projects in the Netherlands and Spain are expected to generate carbon credits within five years.

In addition, in Queensland, Australia, Shell has established an 800-hectare endangered native forest regeneration project. In Malaysia, Shell and the Sarawak state government are jointly studying the potential for a nature conservation, restoration and enhancement venture for Sarawak’s natural landscape.