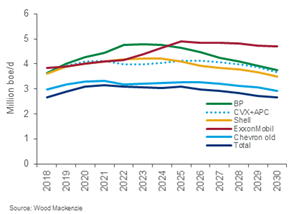 LONDON, HOUSTON and SINGAPORE -- Commenting on Chevron’s US$50 billion cash-and-stock acquisition of Anadarko, Roy Martin, Wood Mackenzie’s senior corporate analyst, said “This is the biggest upstream deal since Shell and BG in 2015.

“Chevron now joins the ranks of the ultramajors―and the big three becomes the big four.”

Once the deal closes, Chevron will now be the second-largest producing major, in 2019 terms. It was fourth.

Mr. Martin added: “The acquisition makes the majors’ peer group more polarized. ExxonMobil, Chevron, Shell and BP are now in a league of their own.

“The deal plays to Chevron’s strengths, which are tight oil and LNG,” he said. “On top of this, it diversifies their growth options, while also giving them more in tight oil.

“By buying Anadarko, they take on a highly contiguous Delaware basin position in the Permian. Chevron ought to be able to do more with the acreage than Anadarko, which lagged behind in terms of well productivity. Chevron’s deepwater Gulf of Mexico position is also strengthened.”

Frank Harris, vice president, LNG consulting, said: “We do not expect the deal to have any near-term impact on the Mozambique LNG project, as Anadarko has indicated that FID is imminent. However, Mozambique offers attractive long-term growth and diversification opportunities for Chevron's LNG portfolio."

RT Dukes, research director, Lower 48 oil and gas, added: “Chevron has been noticeably absent in the midstream rush of the past couple of years. It now takes a 55% stake in Western Gas, which goes a long way toward fixing that.

“Also, APC Western’s structure was simplified at the end of last year, giving Chevron a vehicle to spin assets down in the future if needed.”

The deal will also see Chevron assert itself even more as the leader in low-royalty assets in the US Lower 48, said Lower 48 research director Robert Clarke. He added: “Chevron should truly outperform on cash flow and payback metrics for tight oil."