125 years of Wintershall: Anniversary year and start of a new chapter in the company’s history 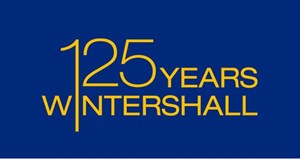 KASSEL, Germany -- Wintershall was founded exactly 125 years ago, on Feb. 13, 1894. “A proud birthday only few companies get to experience,” says Mario Mehren, Wintershall’s CEO. Wintershall is now Germany’s largest internationally operating crude oil and natural gas producer. It was a long journey to achieve that: The company was originally founded to produce potash for use as a fertilizer. Here’s a brief look back at the company’s history:

How a chance event caused the company to change tack: from potash to crude oil

Heinrich Grimberg and Carl Julius Winter registered a joint drilling company for mining potash in February 1894. Its name was made up of the founder’s name “Winter” and the old Germanic word “Hall” for salt: hence Wintershall.

The company then took a completely new direction following a chance occurrence: an incursion of crude oil in a potash pit in 1930. That opened up a new field of business, since potash production had slumped as a result of the global economic crisis. This oil discovery and the proximity between the potash and crude oil were an opportunity Wintershall capitalized on. For example, Wintershall took a stake in two companies that had high-yielding oil sources near Hanover in 1931.

Wintershall is also taking a critical look at its own history in its anniversary year. For example, the Reich Drilling Program that was launched in the mid-1930s and in which Wintershall at the time participated. “We are tackling this part of our history head on,” says Mehren. “Openly and transparently.” Renowned historians are currently investigating the conduct of the German oil industry as a whole and Wintershall’s representatives back then. The results will be presented at a symposium held by the German Society for Corporate History in the second half of the year.

From crude oil to natural gas: The first pipeline in Germany is built

After the Second World War, natural gas production emerged as a new line of business for Wintershall. The company made its first gas discovery in 1951 at Bentheim in Lower Saxony and soon became a pioneer in natural gas production in West Germany – for instance with the first gas pipeline from Rehden to Marienhütte. However, it soon became clear that domestic oil and gas production alone could not cater for rising demand. Wintershall therefore began operations abroad – initially in Peru in 1954, then later in Libya, Canada and Oman.

Under the roof of BASF: expansion of international oil and gas production

In 1969, exactly half a century ago, Wintershall became a subsidiary of BASF. By taking over Wintershall, the chemical company secured its own supply of important natural resources. Conversely, Wintershall was able to expand its oil and gas business abroad as a result of the greater financial power behind it.

A milestone in the internationalization of Wintershall’s operations was an agreement concluded in 1990 with Russia’s Gazprom, the world’s largest producer of natural gas. What started as an agreement on marketing

Russian gas evolved over the next more than 25 years into close partnership: with joint gas production and infrastructure projects, like the Baltic Sea pipeline Nord Stream. As part of this close cooperation, the gas trading company WINGAS was established as a joint venture in 1993. In a large share swap in 2015, Wintershall relinquished its shares in WINGAS and in return was able to expand natural gas production with Gazprom in Siberia even further.

Whereas Wintershall has continuously increased oil and gas output since the 1970s, the Kassel-based firm has shed other business segments in the past decades. They include potash and rock salt business, which was hived off to the company Kali+Salz AG in 1970, and later the refinery business and service station chain NITAG/Deutsche Gasolin.

Besides Russia, the North Sea – and Norway in particular – is now a key pillar in Wintershall’s oil and gas production. Other major focus regions apart from Germany, the North Sea and Russia are South America, North Africa and the Middle East. “We are focusing on strategically selected regions,” states CEO Mehren: “Wherever we operate, we are one of the top companies. And in many cases even the leader.”

Wintershall is celebrating and commemorating its 125th birthday by publishing information and staging events in the anniversary year. They include an internal traveling exhibition, as well as special Internet sites and a school competition. A ceremony is also planned in Kassel’s documenta hall in November.

A look at Wintershall’s history also shows how far the cooperation with DEA Deutsche Erdöl AG, the other major German oil and gas producer, dates back. Wintershall conducted its first foreign project, in Peru, together with DEA. There were later joint projects in, for example, Libya, Norway and above Germany: Wintershall and DEA worked together to develop the two large German crude oil fields Schwedeneck in the Bay of Kiel and Mittelplate in the Wadden Sea in Schleswig-Holstein. The two companies are still producing oil together from Mittelplate. Yet the history of their cooperation also covers other fields: From the 1950s, Wintershall and DEA were involved in Deutsche Gasolin AG and later in Deminex GmbH, a joint venture of the German mineral industry that operated between 1969 and 1998.

Wintershall and the just five years younger DEA have therefore had close links with each other through numerous projects over the decades. Now the two German companies with their long and rich tradition are planning to merge. As Mario Mehren notes: “Wintershall and DEA have often worked side by side successfully. We now intend to move forward together: as Wintershall Dea. Two players who have already enjoyed long ties are now growing together.”

The merger between Wintershall and DEA will create Europe’s leading independent oil and gas company. “This merger is the right step at the right time to respond to the changes in our industry,” is the conviction of Wintershall’s CEO. “And so we’re doing precisely what has so often been the hallmark of Wintershall in its history: We’re tackling change and challenges – with the courage to adopt new approaches.”

Wintershall Holding GmbH, based in Kassel, Germany, is a wholly-owned subsidiary of BASF in Ludwigshafen. The company has been active in the extraction of natural resources for 125 years, and in the exploration and production of crude oil and natural gas for over 85 years. Wintershall focuses on selected core regions where the company has built up a high level of regional and technological expertise. These are Europe, Russia, North Africa, South America, and increasingly the Middle East region. The company wants to expand its business further with exploration and production, selected partnerships, innovation and technological competence. Wintershall employs about 2,000 staff worldwide from 50 nations and is now Germany’s largest, internationally active crude oil and natural gas producer.

At the end of September 2018, BASF and LetterOne signed a binding agreement to merge their respective oil and gas companies, Wintershall and DEA (Deutsche Erdöl AG). Subject to regulatory approvals, the transaction is expected to close in the first half of 2019. Wintershall DEA would become the leading independent oil and gas producer in Europe. BASF and LetterOne are planning an initial public offering (IPO) for Wintershall DEA in the medium term.