WASHINGTON – The U.S. Energy Information Administration reports that changes in the oil investment and production cycle may be affecting trading dynamics for West Texas Intermediate (WTI) and Brent crude oil futures contracts. Many U.S. producers that may have traditionally hedged production years in advance may now only need to hedge using short-dated portions of the futures curve. Many domestic producers have shifted their production portfolios toward tight oil production, which has a short investment and production cycle, and could be reducing their participation in long-dated WTI futures. For example, the ratio of open interest for WTI contract months 13 and longer to current U.S. monthly production has declined since 2013. In contrast, as of October 2019, a similar ratio for Brent crude oil to production outside the Organization of the Petroleum Exporting Countries (OPEC) and the United States increased to its third-highest level, suggesting increased liquidity in long-dated Brent futures (Figure 1). Brent is the relevant crude oil benchmark used among non-OPEC, non-U.S. oil producers. Similar research from the U.S. Commodity Futures Trading Commission (CFTC) published last year suggests the lower open interest among long-dated WTI futures contracts is a result of the changing investment and production cycle for U.S. oil production. In contrast, new upstream projects outside the United States are primarily deepwater projects, which have a long investment and production horizon. These qualities could be contributing to increased participation in the long-dated portion of the Brent future curve. 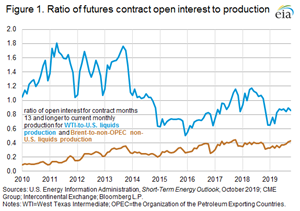 Trading volume for long-dated Brent crude oil futures contracts is higher than WTI (Figure 2). Market participants’ increased use of these long-dated Brent futures contracts could reflect some of the production growth in non-OPEC countries, particularly in countries other than the United States, such as Brazil and Norway. EIA forecasts that next year, crude oil and other liquids production in non-OPEC countries other than the United States will grow at the fastest rate since 2014, increasing by 0.6 million barrels per day (b/d) from 45.9 million b/d, the estimated 2019 production level. Deepwater offshore projects are the main type of upstream project expected to come online and contribute to production growth next year. These projects typically take years to develop but also have relatively shallow decline rates once in production. For market participants, such qualities could make using long-dated futures contracts attractive for managing financial risk. 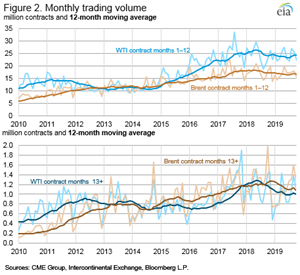 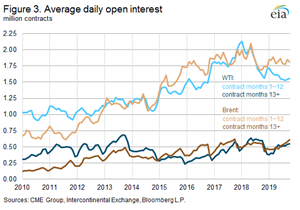 These changes in trading volume and open interest could reflect the different investment horizons for upstream oil supply projects, particularly the different types of upstream projects in the United States compared with those in other non-OPEC countries. The increase in crude oil production in the United States during the past decade has been primarily from tight shale formations in the Lower 48 states, which generally have shorter investment and production cycles than the types of upstream projects financed in other non-OPEC countries. EIA’s Short-Term Energy Outlook model for U.S. Lower 48 crude oil production, for example, acknowledges that changes in Lower 48 states’ crude oil production follow changes in prices and rig counts, with about a four-to six-month lag. In contrast, offshore deepwater projects often take years of appraisal and development before production volumes come online. EIA forecasts that offshore production from Brazil and Norway will be the largest contributors to non-OPEC liquids production growth outside of the United States in 2020 (Figure 4). 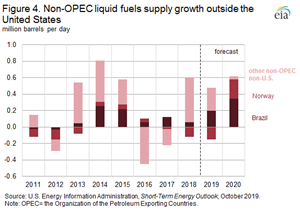 The different types of upstream projects could be reflected in the volume and open interest trends for WTI and Brent. For the WTI futures contract, although the long-dated open interest is only slightly lower than levels earlier in the decade, the levels are low relative to the significant increase in U.S. crude oil and other liquids production since then, as shown in the ratio of the open interest to production in Figure 1. In other words, pre-2014 WTI consistently had more than one barrel in long-dated futures contract open interest per barrel of existing production, suggesting high liquidity for producers that wished to hedge future production. Using this same metric for long-dated Brent contracts compared with non-OPEC production outside the United States, Brent remains lower than WTI, but it has increased significantly since the beginning of the decade, suggesting increasing liquidity in long-dated Brent futures contracts.