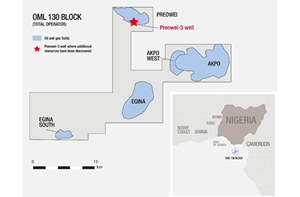 The Floating Production Storage and Offloading (FPSO) unit used to develop the giant Egina field is the largest one Total has ever built. This project has also involved a record level of local contractors. Six of the eighteen modules on the FPSO were built and integrated locally, and 77% of hours spent on the project were worked locally. Startup has been achieved close to 10% below the initial budget, which represents more than $1 billion of CAPEX savings, due in particular to excellent drilling performance where the drilling time per well has been reduced by 30%.

Initially discovered in 2003, Egina field is the second development in production on the Oil Mining Lease (OML) 130 following Akpo field, which started-up in 2009. Preowei field is another large discovery made on this prolific block for which an investment decision is scheduled for 2019.