WASHINGTON, D.C. -- In the September 2018 update of its Short-Term Energy Outlook (STEO), the U.S. Energy Information Administration (EIA) increased the forecast price for the Brent spot price to $73/bbl in 2018 and $74/bbl in 2019. EIA expects West Texas Intermediate (WTI) crude oil prices will average about $6/bbl lower than Brent prices in 2018 and in 2019.

In early August, crude oil prices fell as significant declines in some emerging market currencies may have contributed to increased concerns about global economic growth and its potential effect on oil demand. However, oil prices rose in the second half of August following reports of reduced purchases of Iranian crude oil ahead of the United States reinstituting sanctions on Iran in November. Other supply developments likely contributed to tighter oil inventories, which contributed to higher prices. A restart of some Canadian production after July's oil sands outage is expected to be delayed until September, and tropical storm activity in the U.S. Gulf of Mexico led to the shutdown of some offshore crude oil platforms. Global petroleum inventories were estimated to have declined by almost 0.4 MMbpd in August, the seventh consecutive month of net inventory withdrawals. 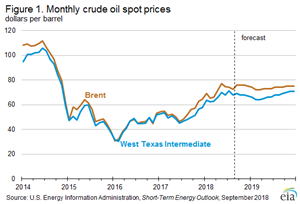 EIA forecasts total global liquid fuels inventories to decrease by 0.4 MMbpd in 2018 compared with 2017, followed by an increase of 0.1 MMbpd in 2019. The September STEO forecast for inventory draws of 0.4 MMbpd in 2018 is an increase of 0.2 MMbpd compared with the August forecast, and the inventory builds of 0.1 MMbpd in 2019 are 0.2 MMbpd smaller than the August forecast. Changes to the timing and impact of the sanctions on Iran and to U.S. crude oil production are driving the changes to the forecast global balances.

Because the effects of sanctions on Iran are taking hold earlier than previously forecasted, production from the Organization of the Petroleum Exporting Countries (OPEC) has been revised downward in the September STEO. Third-party ship tracking data indicate that several countries may have already reduced purchases of Iranian crude oil, and August estimates of waterborne crude oil exports from Iran are 19% lower than the average for the first seven months of 2018. EIA estimates that Iranian crude oil production declined 0.2 MMbpd from July to August. However, if the reduction in Iranian crude oil production and exports is larger than expected, the disruption to the crude oil market in the fourth quarter of 2018 could result in price increases.