STAVANGER -- In one of two Monday afternoon sessions at the Offshore Northern Seas (ONS) conference & exhibition in Stavanger, Norway, executives from Saudi Aramco and Pioneer Natural Resources spoke of operational efficiencies gained at their firms, and how they are striving for excellence in a still-recovering global market. Naturally, continued innovation and good decision-making remain paramount.

Saudi Aramco V.P. for Petroleum Engineering & Development, Nasir K. Al-Naimi, lamented that too many projects around the world remain on hold. “Investments that are being made are mostly incremental improvements. Too many long-term, major projects remain on hold. To put it simply, if we are to remain competitive, we must innovate. To innovate, we must invest. We must invest in both technology and talent.” 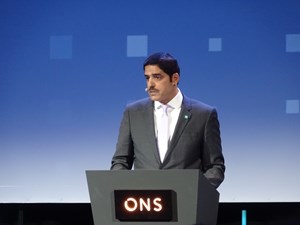 Meanwhile, the industry is at “the crossroads of the digital world,” continued Naimi. “We have the opportunity today, to utilize an Internet that is more dependable, more insightful and more accessible than ever before. A single drilling rig, for example, can generate terabytes of data, every single day.” Naimi went on to say that robots are taking on a number of tasks at Saudi Aramco, including various inspections. “The robots bring about a 50% increase in productivity,” he continued.

So, how best to invest in innovation, he mused. “First, we (operators and service companies) collaborate. Second, we must invest in our people, he explained. “Right now, about 60% of our E&P people are below age 35.”

Coming from the viewpoint of a large U.S. independent, as opposed to one of the biggest national oil companies, Pioneer Natural Resources Chairman and CEO Scott Sheffield said his firm finds that concentrating its effort in the Permian basin of West Texas is the best way to utilize its resources. “We’ve come a long way in the Permian,” said Sheffield somewhat nostalgically. “People were originally drilling wells that were making 50 bpd. At the University of Texas, they us that shale did not produce. They were wrong.”

Sheffield said that most Permian operators are focused on four to six zones within the region’s various layers. “Most companies, 75% of what they have is Tier 1. But more companies are going to Tier 2. Current production in the Permian is 12 Bcfd of gas and 3.5 MMbopd. I think you will see the gas go to 25 Bcfd, and the oil will go to 7 MMbopd. It may go even higher, but that would be at a slower rate.”

Asked to relate some things that he has learned along the way in running a large independent, Sheffield said that there are three items in particular. “One thing I’ve learned, never divest yourself of long-life assets, because you never know what’s going to happen to the technology. Number two, we’re going to go through another downturn. I don’t know when it will be---we’ve been through upturns and downturns. I’ve been through five downturns. One thing is that most companies have been overleveraged. We had over a hundred billion dollars in bankruptcies this last downturn in 2015 and 2016, just in the U.S. It’s best to have a clean balance sheet and no leverage. And number three, have a great culture of people. What people want to do is make something inside your company valuable. You have to get feedback. It’s very important to have a culture that encourages entrepreneurship; give them the technology and let them perform.”

Asked about his firm’s preferences for one play over another, Sheffield explained that Pioneer sold its Eagle Ford assets to an Australian company because “the returns we get in the Permian are better. And we have a hundred-year inventory (in the Permian). I can’t justify to the shareholders, to invest in the Eagle Ford, when the returns are better in the Permian.”

Sheffield said that Pioneer is trying to make the Permian more attractive to recent college graduates. “We have to fight the thought among college graduates that ‘I don’t want to work the next 35 years in the Permian. The biggest raider of our people is private equity.” On yet another problematic subject, Sheffield said that his company is in better shape than most, as relates to access to sufficient pipeline capacity. “You have to have firm transportation, and we committed to that several years ago. That’s why 90% of our crude is getting Brent pricing.”

Asked by an audience member about a lack of many European companies participating in the Permian, Sheffield had some thoughts on the reasons. “Initially, the Europeans went into gas, probably at the wrong time. Nobody knew at the time that we were going to take gas from $8/Mcf to $3/Mcf. So, nobody knew we were going to find as much gas as we did. The only recent (transaction by a European firm) is Shell making a good acquisition from Chesapeake at the right time in the Delaware. The rest of the European majors—the CEOs that I’ve talked to—say that it’s too expensive. Eventually, I think more and more majors will get there, because it’s the fastest-growing region for the next 10 years in the world.”