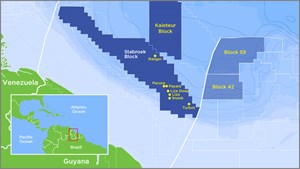 NEW YORK -- Hess Corporation has announced that its subsidiary, Hess Guyana (Block B) Exploration Limited, had reached agreement with Esso Exploration and Production Guyana Limited (ExxonMobil) to acquire a 15% participating interest in the Kaieteur Block, offshore Guyana. The Cooperative Republic of Guyana has provided Hess and ExxonMobil an instrument detailing the transfer of interest, which has been completed.

The Kaieteur block is located approximately 155 mi (approximately 250 km) offshore the coast of Guyana, adjacent to the Stabroek Block. The Kaieteur Block is approximately 3.3 million acres (approximately 13,535 km2), which is equivalent in size to more than 580 deepwater blocks in the Gulf of Mexico. The work program in 2018 will include processing and interpretation of approximately 5,700 km2 of 3D seismic data and evaluation of a future drilling program.

Significantly, the Kaieteur Block lies in the same geological basin as the Stabroek Block, where total recoverable resources of more than 3.2 Bboe have been discovered to date. Hess has a 30% working interest in the Stabroek Block.