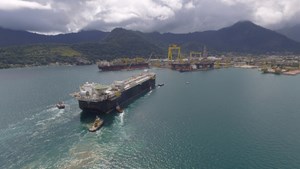 The FPSO P-69 is a standardized production vessel offshore Brazil with a capacity for 150,000 bbl of oil and 6 MMcmgd. Photo: Shell.

Operated by Petrobras, P-69 is a standardized vessel that can process up to 150,000 bbl of oil and 6 MMcm of natural gas daily. It will ramp up production through eight producing and seven injection wells.

“The Brazilian pre-salt fields are some of the best deepwater provinces in the world,” said Andy Brown, upstream director for Shell. “With significant flowrates, deepwater Brazil projects are breaking even under $40/bbl. We commend Petrobras on this production milestone, and we look forward to progressing additional development plans with our consortium partners as well as for our recently-acquired, deepwater Brazil blocks.”

Following Lula Extreme South, the next FPSO is P-67 for Lula North. The Libra product sharing agreement continues to progress with an extended well test as well as the Mero 1 FPSO, and additional FPSOs are planned. Shell also has development drilling planned for its operated, Gato do Mato South field in 2019.

Shell has a 25% stake in the Lula consortium, operated by Petrobras (65%). Galp, through its subsidiary Petrogal Brasil, holds the remaining 10% interest.