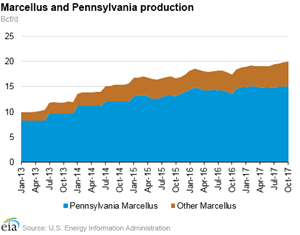 Permitting and drilling activity in Pennsylvania is concentrated in a few counties with the state’s most productive wells. Of the three counties with the largest number of permits and rig counts, two of them—Washington and Greene—are in the southwest region of the state. Susquehanna County in the northeast has the third-highest number of permits and rigs. In 2016 and 2017, these three counties combined accounted for slightly more than half of the total permits and two-thirds of the rig operating in Pennsylvania.

Pipeline projects are being developed close to Pennsylvania’s southwest and northeast regions to carry natural gas from these counties to demand centers. Current pipeline projects include the 3.25 Bcfd Rover Pipeline Project and the 1.5 Bcfd Nexus Gas Transmission Project, both slated to begin operations during the first quarter of 2018. Last year, completed projects include the Rockies Express Zone 3 expansion, which entered into service in January 2017, to increase the capacity to move natural gas westward out of southwest Pennsylvania and the Algonquin Incremental Market pipeline, which entered into service in December 2016, primarily to move natural gas from northeastern Pennsylvania into New England.