OKLAHOMA CITY (Bloomberg) -- The era of the monster frac has arrived in North America, and Chesapeake Energy Corp. is singing its praises.

Chesapeake said Thursday at an analyst conference that it set a new record for fracing by pumping more than 25,000 tons of sand down one Louisiana natural gas well, a process the shale driller christened "propageddon.” The super-sized dose of sand is able to prop open bigger and more numerous cracks in the rock for oil and gas to flow. Output from the well increased 70% over traditional fracing techniques, Jason Pigott, V.P. of operations, said during a presentation. 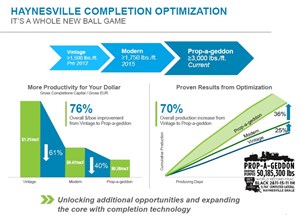 “What we’re doing is unleashing hell on every gas molecule downhole,” Pigott said.

Shale drillers aren’t holding back in North American shale fields, where the average amount of sand used for each well has doubled since 2014, according to Evercore ISI. At the same time, the length that wells are drilled sideways underground has grown by 50%, and the number of zones for hydraulic fracturing are also up by half. Each zone of the well isolated for each frac is also growing larger.

The more massive and complex wells are helping producers manage through the worst financial crisis in a generation by drawing more oil and gas at reduced costs. The price of West Texas Intermediate, the U.S. crude benchmark, cratered to a 12-year low in February and still trades at less than half the $100-plus prices of June 2014. To cope with the market crash companies slashed billions in spending and cut more than 350,000 workers around the globe.

The fracing process continued to get bigger even as the industry was strapped for cash, James West, an analyst at Evercore, said Thursday in a phone interview. "We expect as the recovery for commodity prices unfolds and people have more money to spend, completions will only rise further."

Explorers are taking advantage of the larger frac jobs while prices for oilfield work remains low. Halliburton Co., the world’s largest frac provider, told analysts and investors Wednesday on a conference call that about 70% of the industry’s fleet of frac pumps are being put to use. Halliburton confirmed it executed the record frac for Chesapeake.

The amount of proppant used in Chesapeake’s record-setting well was more than twice the amount used on a per-foot basis in traditional frac jobs, according to a slide presentation that accompanied Pigott’s remarks. The company used 50.185 million pounds (22.76 million kilograms) of sand in its Black 2&11-15-11 1H well in the Haynesville shale region of Louisiana earlier this month. The well had a lateral length of 9,764 ft.