PARIS -- Vallourec is celebrating 50 years of its VAM premium connections. A revolutionary innovation at its launch in 1965, when Alexandre Madrelle, a talented engineer at Vallourec, together with his team, first perfected it, VAM has not stopped developing since then, thus anticipating and dealing with the industry's technological challenges, with and on behalf of its customers. 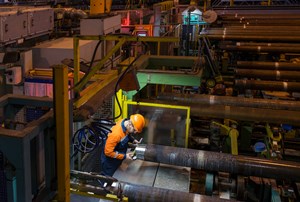 Vallourec is celebrating 50 years of its VAM premium connections.

As well as being a premium product, VAM has now become a brand, made up of 30 patented product lines, a veritable ecosystem based on a network of licensees and service centers located throughout the world, and, lastly, a hybrid economic model, built up through partnerships, joint ventures and mergers and acquisitions.

The VAM adventure began in 1965 with the development of a gas field at Lacq in the southwest of France that it was thought could not be exploited as it had too high a sulphur content. In response to these unique conditions, Vallourec developed the first gas-tight connection in a highly corrosive context: the first VAM was born.

Since then, Vallourec has developed connections adapted to increasingly complex conditions, and which nowadays can operate at depths of over 7,000 m in offshore fields and pressures of 1,000 bars.

The VAM TOP, launched in the 1990s specifically for high pressure/high temperature fields is now the most used connection in the world. It was Vallourec, too, that developed the first solutions for the Brazilian pre-salt fields and that optimized the connections and solutions for non-conventional deposits in the U.S. In 2008, another chapter of the history was written with the launch of the VAM 21.