The David Bowie song referenced in the headline comes to mind as we look at how produced water management will be evolving. This evolution, however, is happening quicker than some have predicted.
Mark Patton / Hydrozonix

The David Bowie song referenced in the headline comes to mind as we look at how produced water management will be evolving.  This evolution, however, is happening quicker than some have predicted. It is quite normal for new industries to develop new regulations as they evolve, and although produced water has been around for decades, the development of hydraulic fracturing has created a new life and industry for onshore produced water management. 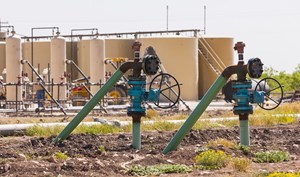 New rules in N.M. You see, effective Aug. 5, 2022, new rules were established in New Mexico, which could have far-reaching ramifications.  The regulated community has 90 days after the effective date to comply. These new requirements, found in Title 20, Chapter 2, Part 50 of New Mexico Environmental Department (NMED) regulations, require the monitoring of Volatile Organic Compounds (VOCs). Part of these new requirements are weekly inspections, monthly monitoring and calculating and estimation of VOC emissions.

These requirements are for surface equipment, but they also include “Produced Water Management Units” in excess of 50,000 bbl of capacity. For those operators measuring VOCs in excess of specific quantities expressed in tons per year, there are additional requirements. For existing facilities, they have until 2025 to reduces VOCs by 30% and even further in future years. New facilities will have to comply immediately with their VOC emission reductions. Regulating VOC emissions from upstream oil and gas has long been expected. New Mexico has tried previously to impose regulations but failed to get the support, and most regulation died in committee.

To increase recycling of produced water, the use of larger and larger pits is a necessity. Produced water is not generated in the quantities needed, in the right locations, to make it easy. It must be aggregated in large quantities, because the amount of fluid needed to complete an unconventional well is used in a relatively short period of time. New concerns, with the growing frequency and magnitude of earthquakes, are encouraging more produced water recycling. Once again, more recycling means more pits, which means more surface area and more potential to emit.

The regulation of VOCs is not a new trend but one that has been around for as long as the Clean Air Act has been in existence. VOCs include toxic and carcinogenic compounds, like benzene, combining emission concerns with health and safety concerns. VOCs aren’t limited to air emissions, either. They are also a prevalent contaminant in groundwater and waste waters.

So, what are these far-reaching ramifications I mentioned? First, we begin collecting the data through monitoring and reporting. Then we begin speciating this data, looking at constituents like benzene. Benzene is also regulated as a “hazardous waste,” but due to the exemption for oil and gas exploration wastes, produced water is exempt. This is an exemption that has been challenged a few times already over the last 20 years, and we expect more to come. Even the GREEN Act of 2021 originally included language to eliminate the oil and gas exemption.

One of the original arguments for the exemption was that produced water and drilling muds specifically were high-quantity but low-toxicity. That was before benzene became regulated as a “hazardous waste”, and unconventional oil and gas exploration was developed, which dramatically increased the quantity of produced water. We should have an expectation that the oil and gas exemption will be challenged again, and the collection of new data will only strengthen the case for eliminating that exemption for oil and gas wastes.

Yes, the management of produced water will continue to change, but that’s what makes oilfield water management exciting: the opportunity to react to change but be proactive as well. We are already evolving as an industry to reduce emissions.  So why wait for New Mexico’s requirements for VOC reduction? Many operators already have started and continue to, as a policy, capture, collect, reduce and eliminate fugitive emissions.  Let’s extend this requirement to include standards for elimination or reduction of VOCs in produced water.

If, for example, we reduce benzene in produced water below the regulatory threshold of 0.5 ppm, then it will not be regulated as “hazardous,” and we no longer have the risk of losing the exemption hanging over our heads. To understand the impact, consider that every disposal well currently handling produced water will no longer be able to, if produced water were to lose its exemption. That’s millions of barrels of produced water per day that would require a new home, when capacity for that much “hazardous waste” doesn’t exist.

But isn’t recycling exempt from “hazardous waste” requirements? The short answer is no. If produced water could be used, as is, with no processing, you might be able to argue it never becomes a waste. However, in the “hazardous waste” rules, this isn’t recycling but reuse, and any processing, which would include disinfecting, solids removal, oil removal or any chemical treatment, would be considered treatment, and the recycling would fall under hazardous waste rules. But, as I mentioned earlier, if we remove or reduce benzene below the regulatory threshold, it would never be hazardous.

The path should be clear. We need to continue our focus on reducing emissions, and we should look at VOC removal as part of our regular recycling process for produced water. Produced water will continue to evolve, and we need to participate in the process, interact with the regulatory agencies, participate in their studies, help with development of new regulations, and not just react. As with all new industries, regulation will evolve, and the industry will become more complex. That’s a good thing.

Mark Patton
Hydrozonix
Mark Patton is president of Hydrozonix and has more than 30 years of experience developing water and waste treatment systems for the oil and gas industry. This includes design, permitting and operation of commercial and private treatment systems, both nationally and internationally. He has seven produced water patents and two patents pending. He earned his B.S. in chemical engineering from the University of Southern California (USC) in 1985.
Related Articles FROM THE ARCHIVE