What's New in Exploration: Post-Nov. 8: A bridge too far?

The issue today is not so much the what, but who controls energy, and who benefits from energy policy. The battle in the fossil fuel industry is not technical nor resource-bound, but about dominating ideology.
William (Bill) Head / Contributing Editor

Climate change has been occurring on this planet ever since a climate was formed. That took more than a billion years. Believeing that man can cause the climate to to collapse is ingorant, leading to stupid behaviors. Politicizing climate change as fear is dangerous. There are thousands of of legitimate scientists, who have looked at real data and have unequivocally concluded that no carbon level predicted in the atmosphere that can be caused by humans will exceed carbon levels that have existed on the planet before human DNA appeared.

Using the technology. That is where the exploration industry for energy might have a signifianct win. Exploration tech has lead to improved reservoir tech. Studying rocks, alone, progressed to pore spaces, to permiabilty, to hydraulic conductivity to pressure aspects of fluid migration and transformation insitu—all basically to remove fluid. Injecting fluid into those same rocks has been prevalent since the 1930s. Water, natural gas, hot water, steam, surfactants and CO2.

Now, the CO2 storage mandates, awakening hydrogen thinking, too, ask the science community to predict kenetic molecular interactions in the subsurface over a future exceeding 10,000 years. The question is not just the size of a molecule but how it moves among other molecules in a pretent statis condition trapped by a rock barrier that can not be impermiable over geologic time. All of the effort at storage should not only use exploration tech, but should advance it into areas previously not considered. Good for Big Energy and tech service.

The “Tranisiton to alternate energy”—a new Tranisiton Period today? Nonesense. We have always been in transition to aquire energy. Note the photo of the North West Pool, near Burkburnett, Texas, circa 1919, Fig. 1. Workers were drilling for oil needed to complete the transition to power machines that replaced the horses being employed to pull the supply wagons. 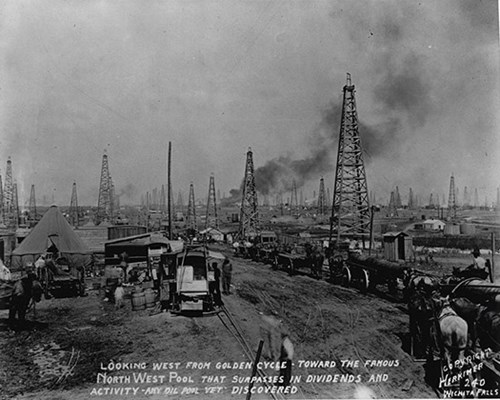 The issue today is not so much the what, but who controls energy, and who benefits from energy policy. The battle in the fossil fuel industry is not technical nor resource-bound, but about dominating ideology. At the recent Gulf Energy Information Carbon Intel forum, an SLB  executive keynote speaker proclaimed the obvious—without regulation, the current emphasis on carbon storage would not be at the current level of industy concern that is affecting global energy investment.

And a Chevron speaker at that forum noted two important points. One, carbon placed into reservoirs has been occurring for decades. Second, Chevron does not want to see government deciding winners vs. losers. It’s probably too late for that point. The fossil energy war is on.

I posed a question to “Big Oil,”—“if regulation could be suspended for 20 years, what would Big Oil do?” Answer, keep investing in solutions to provide energy in all forms to all geographic locations. That approach is certainly better than distributing energy benefits, based on social equity that one of the other speakers advanced.

A reflective answer to the general question, “what would you want to see in the future for CO2 science,” was a wise comment. That person remarked, “instead of a focus on putting CO2 into the ground forever, what about finding more uses for that CO2 as a resource to improve the human condition?”  Wow. Smartest person in the room was there.

No matter how you calculate energy, and no matter how green you want to calculate, even at $94 per 5.7 MMBtu, fossil oil is a bargain. Nat-gas even more so. https://www.eia.gov/energyexplained/units-and-calculators/

Lessons: 1) All the energy found in fossil fuels is the direct result of solar energy converted to plant form, decayed by bacteria [an animal] compressed, held in anerobic stasis for years, entropic, and exogenic. Carbon gas from the atmosphere caused an explosion of plant growth that captured that solar energy.

The decay became what is referred to as kerogen. That matter was physically transformed into viscous liquid when heated and moved; became a solid if cooled; then back to liquid, moved, and recycled ad infinitum until Chevron or similar extracted crude oil, processed it into portable fuel and you put it into your company jet.

Crude oil on your shoes is not more than one million years old. Oil in a container at Walmart is made of molecules left over from the Big Bang. When transformed into burned extract from your machine [less lead], the extract [now minus energy] becomes catalyst for improved plant growth. Recall, E=mc2. Further, recall that energy dissipates over radial, 3-dimensional space by the inverse square of distance [1/r2].

And 2), Energy is freedom. Energy has advanced the quality of life for all life on the planet. Energy has made or limited nations and peoples. 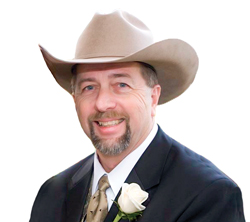 William (Bill) Head
Contributing Editor
William (Bill) Head is a project manager for RPSEA’s Ultra-Deepwater program. As a senior technologist, he has worked over 38 years in U.S. and international exploration, exploitation and production. Mr. Head has been instrumental to several new international ventures, coordinating local and global operations, and has managed one of the industry’s largest computer facilities.
Related Articles FROM THE ARCHIVE