AICDs are the next generation of inflow control technology that autonomously provides a more uniform inflow profile and enhanced production. The FloSure AICD increases oil output over field life and has been deployed successfully in light and heavy oil wells to overcome water or gas breakthrough.
Mojtaba Moradi / Tendeka Michael Konopczynski / Tendeka

Advanced completion technologies address the challenges of fluid flow in advanced architecture wells without the need for intervention. They are designed to encourage proportional production or injection of fluids along the length of the wellbore, to delay or prevent the breakthrough of unwanted effluents, and to respond to changing conditions throughout the life of the well.

Autonomous inflow control devices (AICDs), in which the differential pressure of the device is dependent on the composition, density, viscosity or flowrate of the fluid flowing through it, have become popular in horizontal wells. They reduce the production of unwanted effluents, such as gas and water, allowing operators to optimize oil production rates and maximize oil reserves recovered.

Fig. 00. The FloSure Autonomous Inflow Control Device (AICD) is an effective solution for increasing oil production over the life of the field.

A key challenge when designing an AICD completion is establishing the performance rating and number of AICD devices to be used to deliver the target production rates. This is required because of the different flow performance (differential pressure, dP, versus flowrate) for oil compared to water. 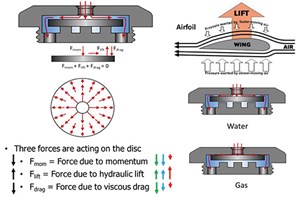 The overall geometry of the device is critical to its ability to balance these forces effectively and create the desired fluid dependent pressure drop. Figure 2 shows the flow performance of one size of the device for single-phase flow of oil (10 cP) and water (0.5 cP) at downhole conditions for reservoir fluids. For any flowrate, the differential pressure across the device is much greater for water than for oil, as shown in the graph.

The concept of an AICD that completely shuts-off gas and/or water production sounds appealing to those wishing to eliminate the production of unwanted effluents. Yet, a full understanding of the dynamics of inflow from the reservoir and phase segregation in the wellbore is necessary to evaluate the impact of highly restrictive AICDs on well oil productivity.

With annular separation, even small water cuts or limited amounts of free gas flowing into the wellbore can cause most of the highly restrictive AICDs in a multiple device zone to shut. This greatly impacts the oil productivity of the zone and the well. This closure may result in the diversion of fluids inside the reservoir to other zones. On the other hand, using AICDs that are not as restrictive of the unwanted effluents allows the operator to continue to produce oil at significant rates when associated with low water cuts or reduced free-gas GORs. 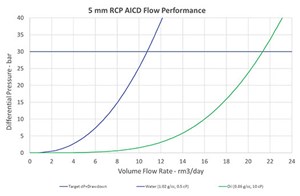 Based on the Darcy inflow equation for liquid flow, if the viscosity of oil is significantly greater than the viscosity of water, for a constant pressure drop from the reservoir to the wellbore (drawdown), the single-phase flow of water will be greater than the single-phase flow of oil. If the difference in viscosity is large, for instance, if water has a viscosity of 0.5P and oil has a viscosity of 10cP at downhole conditions, the water flowrate will be 20 times greater than the oil flowrate at the same drawdown (assuming relative permeability is equivalent) flowing from the same reservoir. If water breaks through from the reservoir to the wellbore, the oil production can quickly be overwhelmed by the water production. Water breakthrough in only 5% of the wellbore can result in equivalent water flow as the oil production from the remaining 95% of the oil-saturated wellbore.

To counter this effect, a liner lined with AICDs is installed with swell packers to segment the wellbore into multiple compartments or zones. When water breaks through in one zone, the AICDs in that zone create a greater pressure drop associated with the water flow, and this reduces the drawdown on the reservoir and water flowrate in that zone.

This information can be used to determine how the balance between drawdown and pressure drop through the AICD is affected by single-phase oil and water flow. It can be used to establish an equilibrium flowrate for each AICD. This value is independent of the permeability of the zone. 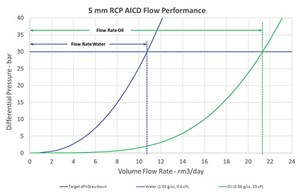 As shown in Fig. 4, this equilibrium point occurs at 10.52 m3/d for the 5-mm RCP AICD with the liquid properties as shown and a total pressure differential between the reservoir and the inside of the AICD liner of 30 bar.

The equilibrium flowrate can be used to determine the number of devices needed in a well with a wellbore inflow simulator. The total well inflow rate without the AICD completion is calculated, assuming the reservoir is saturated with all oil or water (single-phase flow), by imposing the respective drawdown pressure as calculated for the equilibrium flowrate, associated with either phase.

In the example shown, the drawdown for water should be 1.41 bar while the drawdown for oil should be 28.13 bar. The flowrate of the well (in downhole conditions – reservoir m3/d) for either oil or water is then divided by the equilibrium rate to determine the number of devices required. The resulting number of devices, whether calculated based on 100% water or 100% oil, should be similar.

It is widely believed that the ideal Autonomous ICD would be one that would completely shut off the flow of unwanted effluents, or at the very least, provide a very high-pressure drop at a low flowrate. This restricts the flow of water to less than 5% of that of oil for the same differential pressure, known as highly restrictive AICDs.

Understanding this concept helps the petroleum engineer to understand the performance of a well equipped with an AICD completion, and how the well will perform as fluid composition changes.

Productive wells will often require multiple AICDs in each zone to ensure delivery of desired oil rates with minimum additional pressure drop while being able to restrict zones with water breakthrough. It is important not to be overly restrictive of production in zones with minimal degrees of water breakthrough, say 35% water cut or less, because of the potential to continue to deliver significant oil reserves from these zones. Understanding how the AICDs will behave is key to the correct selection of the type of AICD.

Multi-phase flow of fluid in horizontal pipelines has been studied extensively, and several modes of flow have been identified. In particular, the multi-phase gas-liquid flow has been characterized, and prediction of the mode of flow has been mapped, dependent on several derived measures, including Froude number, volumetric flux and mass flux. The likelihood of phase separation depends on the density, viscosity, surface tension and velocity of the fluids, and residence time in the annular space.

For oil-water multi-phase systems, it can be useful to look at a representative example to understand the conditions for phase separation in the annular space. For instance, a 1,000-m horizontal section with 10 equal zones, each measuring 100 m in length, where the AICD liner is 4.5-in. OD inside the 7-in. casing with an ID of 6 in. The annular cross-sectional area of this completion is 0.00798 m2, and the annular volume of a single zone is 0.798 m3. If we assume that the well can produce 1,600 rm3/d (downhole conditions), then each zone will produce 160 rm3/d or 1.852 liters/sec. That means that the worst-case velocity (all flow moving to one end of the zone) in the annulus will be 0.232 m/sec, and residence time will be 7.18 min.

Each application will have its unique results, based on fluid properties, well/reservoir productivity, and production expectations. The results will be different for each application, but the modelling techniques used in this exercise can be employed to find the best AICD completion design for the application operating constraints. 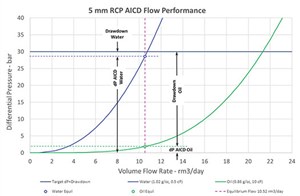 AICDs are the next generation of inflow control technology that not only provides a more uniform inflow profile and enhanced production, but also does this autonomously. Tendeka’s FloSure AICD is a proven solution for increasing oil production over the life of the field and has been deployed successfully in light and heavy oil wells to overcome water or gas breakthrough and ensure uniform production longevity.

The device preferentially chokes unwanted produced fluids while promoting the production of oil from the entire length of the well. The device is fully interchangeable, field-adjustable and engineered for a wide range of applications. Deployed as part of the lower completion, using zonal isolation packers to divide the reservoir into compartments, the AICD can be integrated with sand control screens for soft formations.

When considering the application of AICD completions, there are five fundamental rules to remember:

Most notably, the concept of the equilibrium flowrate for an AICD completion is useful, not only as a tool to help establish the number of AICDs required for a completion, but also to understand the relationship between inflow from the reservoir and flow through the AICDs.

While the calculation of the equilibrium flowrate is useful to estimate the size and number of AICDs required for an application, the fine-tuning of the completion design comes from wellbore inflow and flow simulation, using appropriate software, and considering multiple production scenarios and constraints.

Mojtaba Moradi
Tendeka
Mojtaba Moradi is a reservoir engineer with Tendeka. He received his BSc and MSc degrees in Iran and his PhD in petroleum engineering from Heriot-Watt University, UK and has more than eight years’ experience as a petroleum engineer. He also taught several petroleum and chemical engineering courses at Heriot-Watt University (UK) and Azad University (Iran). Prior to Tendeka, he was involved in various projects from unconventional reservoirs, intelligent wells to CO2 sequestration and gas condensate reservoirs. Mr. Mojtaba has published numerous technical papers.

Michael Konopczynski
Tendeka
Michael Konopczynski is a director of subsurface engineering at Tendeka. He started his career with Shell Canada Limited in a variety of production engineering and technology roles for close to 20 years. His assignments with Shell included projects for steam-assisted thermal recovery, CO2 enhanced recovery, deep sour gas development, and gas-condensate developments in Canada, the United States, and the Sultanate of Oman. Following Shell, Mr. Konopczynski was part of the creation and growth of WellDynamics, where he served as Vice President of Technology, Product Line Management and Marketing. Following the acquisition of WellDynamics by Halliburton in 2008, he continued his role as director of Technology for Intelligent Completions and director of Reservoir Solutions. He is a member of the Society of Petroleum Engineers (SPE), is an SPE Short Course Instructor, and has authored numerous technical papers. He is based in Houston, Texas.
Related Articles FROM THE ARCHIVE