Polymer flooding actually dates back to the 1970s and 1980s, but it is enjoying a resurgence of usage, thanks to more recent results in projects.
Vimal Suhag / SNF Flopam India Pvt Ltd

EOR is a tertiary method to recover between 10% and 30% of crude oil in a reservoir, and sometimes even up to 60%, depending on the technique applied, based on various field studies. 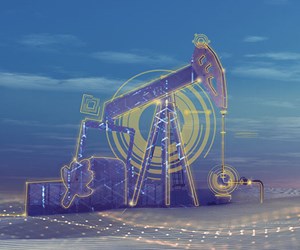 Fig. 1. Once primary recovery—either through natural flow or artificial lift—is accomplished, then EOR methodology is used to produce additional amounts of oil.

EOR methodology is used once the primary recovery or natural depletion of original oil in place occurs, usually recovering up to 20% of light oil, Fig. 1. Secondary recovery methods may include water flooding or gas cycling, which further enhance recovery between 20% and 30%. However, SNF technology has utilized cost-effective tertiary methods like polymer flooding or surfactant flooding. They have proven their worth in recovering far more than primary and secondary methods while costing between $3 and $6 per incremental barrel.

Since its early beginnings, SNF has experienced continuous growth to become a world leader in polymer technology for water treatment and EOR. It has been achieved by applying high technical and ethical standards throughout the company’s development. Our development strategy has always considered environmental and social concerns; it has allowed SNF to set an example on the ESG front to maintain sustainable and environment-minded growth.

SNF has remained an independent company that has reinvested all its free cash flows to obtain the highest rate of growth. There also has been a focus on continuously improving the chemistry and quality of products to meet the performance goals of customers. The company has established strategic alliances with service providers and maintains a wide geographical coverage to serve clients.

To maximize the recovery of hydrocarbons from a reservoir, several methods can be implemented after the natural depletion stage is over. The secondary methods that comprise water or gas injection help in maintaining the reservoir pressure to ensure hydrocarbon flow to the production wells. The recovery factor at the end of this stage often remains below 40% of the OOIP. Tertiary methods are then developed to overcome this issue and reach recovery factors above 60%. Polymer flooding belongs to chemical enhanced recovery; it is a well-known method (over 40 years of commercial application) with low risk and application over a wide range of reservoir conditions. It consists of dissolving polymer in the injected water to increase its viscosity and to improve the sweep efficiency in the hydrocarbon reservoir.

Facts and figures about polymer flooding EOR. Polymer flooding has a long commercial history. In the 1980s, because of the U.S. tax incentives linked to the 1970s and 1980s technologies, companies were eager to implement polymer flooding in their fields. But a lack of comprehensive reservoir studies led to poor results and a progressive abandonment of this recovery method.

A renewed interest was expressed in the 1990s, in China, with the Daqing oil field polymer flooding. In 1992, SNF constructed the world’s largest polyacrylamide manufacturing plant in Daqing for the national oil company of China. Polymer flooding at industrial scale started in 1996. With more than 3,000 wells on polymer flood, Daqing field is the largest current polymer flood with about 220,000 bpd of incremental oil production and 12% OOIP of incremental recovery. Today, SNF has more than 150 references throughout the world and 30 years of experience in polymer flooding. SNF has executed more than 320 chemical EOR projects worldwide. Currently, in India, five projects are being executed, including ONGC’s North Kadi field and Cairn’s Barmer field. 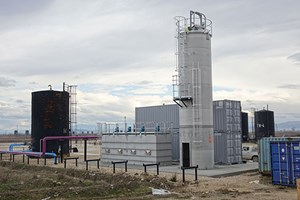 SP (Surfactant Polymer). Surfactant-polymer flooding consists of injecting a surfactant—often a mixture containing co-surfactants, co-solvents, stabilizer—to lower the interfacial tension to values as low as 10 mN/m. An initial freshwater pre-flush is sometimes required to decrease salinity and especially divalent ion concentration in the reservoir. This pre-flush is then followed by surfactant and polymer injection (Fig. 2); these can be injected via different slugs or simultaneously.

Components of ASP (Alkali Surfactant Polymer) flooding. ASP involves the injection of a solution containing polymer, alkali and surfactant. Polymer flooding is designed to increase the volumetric sweep efficiency, as well as the displacement efficiency. Alkali and surfactant processes are designed to recover residual oil. An overview of the mechanisms is given below.

FROM DESIGN TO INJECTION

Polymer flooding projects are more and more challenging, and require a full set of integrated expertise, from chemistry to system engineering. To design such a project, a wide variety of variables must be considered, such as monomer selection, polymer structure, polymer dissolution (Fig. 3), injection system, water pre-treatment and supply chain. 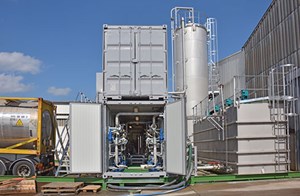 Fig. 3. The Floquip PSU™ for EOR is a patented proprietary piece of equipment designed for high-speed dissolution of very high molecular weight powder polymer in water. The Floquip PSU™ is recommended whenever dissolution time and space for maturation are an issue in large volumes of use.

SNF provides the full range of expertise required to support EOR needs, as evidenced by a recent large-scale multi-year contract for the engineering and construction of a polymer flooding project in Marmul field in the south of Oman. Dedicated teams find the best solution and equipment to fit the requirements of each company and each reservoir. Delivering large quantities of products throughout the world also requires strong logistical capabilities, including assessing and meeting all the demands to deliver products to customers at the right time, at the right price.

Water treatment. When dealing with water treatment, two points must be tackled. The first one concerns the quality of the dissolution or injection water. The presence of contaminants such as oxygen, H2S and iron must be limited to avoid the degradation of the polymer solution.

Sometimes the water must be treated to remove excessive iron or oxygen. The second point concerns the treatment of produced water. SNF is constantly acquiring knowledge and new skills to tackle the degradation of the back-produced polymer. Because not all the polymers are degraded, it is necessary to implement specific treatments (preferentially after the oil/water separation, so as not to affect the quality of the crude) to cut the remaining polymer backbones and, therefore, decrease the water viscosity. Among the possible treatments, chemical and mechanical are the most used.

The project includes an ASP injection plant on an open plot at Jhalora, under ONGC’s fieldwide chemical EOR scheme, utilizing 14 injection wells in a fixed ratio of alkali, surfactant and polymer. Under terms of the contract, SNF must deliver the project within 18 months. A successful pilot using ASP methodology had been conducted at this field between 2010 and 2016.

MK Sahai Group’s general manager (materials management) for the ONGC Ahmedabad asset signed notification of Award (NOA) on Jan. 12. Jhalora field has been onstream since 1977. It has 102 oil-producing wells. It is a light oil field, and to improve recovery, ASP is preferred against allowing increased water cut.

Polymer flooding is a chemical EOR technique. It involves injection of designed quantity and quality of polymer solution in the reservoir to reduce adverse mobility ratio of water to oil and improve the recovery of oil.

This technique will be implemented at ONGC’s Bechraji field, in the Mehsana asset of Gujarat state, to improve the recovery of viscous oil. The scheme consists of 11 injection wells for polymer flooding. The project envisages continuous injection of polymer solution of required viscosity @50 m3/d per well for a total of 550 m3/d for 27 months.

For a period of 27 months, ONGC has contracted a rental supply from SNF of polymer injection modular skids for mixing, hydration, and injection of the designed polymer solution in the designated wells. In addition, Operation and Maintenance (O&M) functions and associated chemical supply will be provided on a turnkey basis during this period.

About the Authors
Vimal Suhag
SNF Flopam India Pvt Ltd
Vimal Suhag completed his bachelors degree in Computer Application, followed by an MBA, from Coventry University, England. He has worked with SNF Flopam India Pvt Ltd, established at Gandhidham, Gujarat state, for the last four years. Mr. Suhag joined as assistant manager HR/Administration and IT, along with supporting other functions like HSE and Security & Branding for the company. He has actively participated in, and has led, one of the polymer injection pilot projects with a team of engineers at ONGC’s North Kadi field, Gujarat. Previously, Mr. Suhag worked with various organizations like Philips Electrolux, a Videocon venture, and Roche Diagnostics Diabetes care division, specializing in marketing and branding in the business-to-customer model. In January 2022, his previous seven years of experience helped him to reach the head of department and senior manager position for Administration, Branding, IT & Security in January 2022.
Related Articles FROM THE ARCHIVE