As U.S. energy prices continue to skyrocket (as of June 2, average regular unleaded gasoline was $4.71 and beyond $8/gal in some areas), and global energy supply continues to be constrained by the pressures of the Ukraine crisis, the U.S. sits in a prime position to bring economic relief in the form of energy to the American people and to the rest of the world.

Unfortunately, while U.S. President Biden’s administration has begun the release of its “inflation fighting plan,” it does not appear that plan includes energy cost relief, nor a focus on solutions within its power to increase production of U.S. energy now. The Administration recently cancelled the few remaining planned lease sales under the expiring U.S. offshore lease program and consistently declines to provide assurance of future lease sales or a concrete timeline on finalizing the next statutorily required five-year leasing plan. 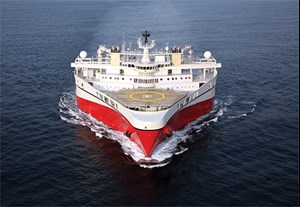 Fig. 1. The GOM region needs more seismic data gathered and available. The PGS vessel, Ramform Titan, arrived in Galveston, Texas, at the end of February and then proceeded to conduct a 4D seismic survey in the GOM for an undisclosed client. Image: PGS.

Regardless of whether the Administration ever intends to offer future offshore lease sales, bringing additional production online and increasing discoverable assets now is possible. However, this requires permitting geoscience surveys in the Gulf of Mexico (GOM) that have been backlogged and stalled for months. Currently, GOM leaseholders are waiting for the Administration to provide “Letters of Authorization” for these surveys that are necessary to bringing already discovered assets online, increasing production of existing assets, and locating additional reservoirs on held leases.

Flawed regulations. Following over a decade of work, the National Marine Fisheries Service (NMFS) in April 2021 issued an Incidental Take Regulation (ITR), under the Marine Mammal Protection Act (MMPA), for GOM geophysical and geological (G&G) activities. This new regulatory framework was added to the existing permitting process managed by the Department of the Interior (DOI). Throughout rule development, industry, technical, and scientific experts repeatedly identified shortcomings of the ITR’s modeling approach which resulted in exponential overestimates of “incidental take” as defined by the MMPA. Instead of using the “best available scientific data” to estimate potential impacts, NMFS forced the model to provide worst-case estimates from energy geoscience activities that have never been substantiated in real life nor with data after six decades of operations in the GOM.

The agency was resolute in maintaining these flawed calculations in its final rule. Now, one year into a five-year rule, the agency admits the rule is broken and recently “discovered a miscalculation” with plans to revise it by sometime next year. Unfortunately, the Administration and NMFS have been reluctant to respond to, or work, on suggested solutions that would immediately resolve LOA issuance delays. But pressure is increasing from Congress to address this esoteric regulatory flaw that prevents GOM producers from increasing production at a time when the world needs it most.

Fixing the leasing/permitting process is imperative. It is no secret that among deepwater regions around the world, the U.S. Gulf of Mexico has some of the lowest emissions and highest resource-intensive production assets. Since the 1970s, geoscience surveys have been the lifeblood of GOM energy production, increasing its discoverable assets, and the federal government’s “mathematical error,” preventing these surveys now, is unnecessarily halting the production of low-carbon, high-energy dense barrels, here at home.

If connecting Americans to clean accessible energy is a priority, the Administration must provide—and be accountable to—a clear accelerated timeline for fixing it. Next year is too late. This has been recognized by many lawmakers, including Democrat Senators Joe Manchin (W.V.) and Mark Kelly (Ariz.). They admonished the President in a letter encouraging development of lease plans, saying, “Delays to seismic permitting present a serious risk to bringing additional offshore production online in the near term while the Five-Year Program is being developed.”

While geoscience is most well-known historically for its irreplaceable role in maximizing discovery and production of mainstay energy sources, alternative sources of energy and low-carbon solutions like wind, geothermal, and carbon capture and storage also depend and rely on its data and are not viable without it. The irony is that under the current statutory and regulatory structure, permitting of the Administration’s “acceleration” of offshore wind has increasingly become a process mired with uncertainty and delay, and similar “mathematical errors” can prevent geoscience from unlocking these vital energy sources and accelerating other low-carbon energy solutions. At this critical time, we need all sources of energy at the table to meet clean energy demand and provide accessibility. Earth science must drive these decisions.

This is not a partisan issue. Access to affordable energy is a human issue. The Administration should do everything in its power to ensure more geological insight, data and analysis are available for policymakers and all energy companies to meet their stated exploration, production and sustainability goals, Fig. 1.

It is far past time to release the backlog of permits that are choking energy development, when it is needed most. Until the President decides to act on behalf of the American people and other countries around the world, and move forward with new leases to relieve energy demand and skyrocketing energy costs worldwide, developing the ones the U.S. has now is the only game in town.