Scott Sheffield has a forewarning for the acreage-restricted private operators helping drive record production in the Permian basin: your annual double-digit growth rates are unsustainable.

Scott Sheffield has a forewarning for the acreage-restricted private operators helping drive record production in the Permian basin: your annual double-digit growth rates are unsustainable. 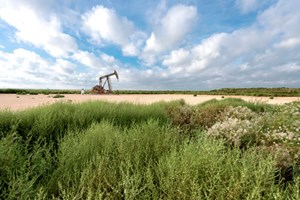 “A few private independents have announced growth rates of 15% to 20% per year and eventually they’ll run out of inventory fairly quickly,” the Pioneer Natural Resources Co. CEO warned on Feb. 17. “Also, many of the private companies are experiencing labor issues, cost issues and can’t get equipment.”

Sheffield says Pioneer will not deviate from a maximum 5% production growth rate, even with “$100 oil or $150 oil,” echoing many of his contemporaries, which flush with cash, are determined to return more of same to investors, rather than maximize production growth. “So far, the public independents are staying in line and I’m confident they will continue to stay in line,” he said.

That confidence is in jeopardy, however, as European turbulence spills over into West Texas and southeastern New Mexico, pressuring multi-zone Permian operators to reverse the calculus. “I will not be surprised, if there is not a call on the U.S. shale producer to grow, depending on what happens to world energy markets, global inflation and some of the turmoil we’re seeing around energy security,” Coterra Energy Inc. CEO Tom Jorden said prophetically on Feb. 24. That was the day Russia’s unprovoked invasion of Ukraine further roiled the market, eventually sending West Texas Intermediate (WTI) oil prices to a since-corrected 11-yr high of $123/bbl on March 8.

For now, the U.S. Energy Information Administration (EIA) estimates April oil production in the Permian’s Midland and Delaware sub-basins will hit a record of just over 5.2 MMbpd, Fig. 1. Mostly associated gas production, likewise, is expected to reach a new high of 20,280 MMcfd, thanks in no small part to basin-wide initiatives aimed at mitigating routine flaring to help reduce emissions, amid concerns over strained takeaway capacity.

Increasing production may be easier said than done, given a tight labor pool, supply chain issues with everything from tubulars to sand, and a nearly 43% year-over-year drop in the Permian inventory of drilled-but-uncompleted (DUC) wells. Vicki Hollub, CEO of Occidental Petroleum Corp, told CERAWeek by S&P Global that even the world’s largest shale play is unable to singularly ease the current supply-demand imbalance. “The call for increased production from the U.S. at this point, especially with supply-chain challenges, can’t happen at the level that’s needed,” Hollub said on March 8 in Houston.

In no danger of running out of resources or places to drill, ExxonMobil plans to increase Permian production this year to more than 550,000 boed, up 25% over 2021. Its subsidiary, XTO Energy Co., will operate between 10 and 12 rigs and 6-8 frac crews in 2022, the company said during the March 2 Investor Day.

The same for Chevron, which aims to hike production by 60,000 boed this year, compared to 2021. The super-major raised 2022 Permian capital expenditure to $4 billion—a $1 billion jump over 2021—and will operate around seven rigs and put more than 200 new wells on production, up 50% over last year. “That’s a meaningful step-up in activity, and we want to execute that well. I don’t think we’re going to be tempted by the price of the day to put that at risk by doing more,” says CEO Mike Wirth.

For others, inflation is taking a bigger bite across their ever-tightening supply chains. “Like all of our peers, we are experiencing inflation across our supply chain. This includes rig rates, pressure pumping, labor, fuel, sand and chemicals,” says Coterra’s Jorden.

An offshoot of the October merger of Cabot Oil & Gas and Cimarex Energy, Conterra, nevertheless, will average six rigs and two completion crews in the Permian this year with 50-60 wells put on production. Nearly 50% of the company’s 2022 drilling and completion spend will be diverted to the Permian, with oil production expected to increase modestly from 78,000 bpd in 2021 to between 81,000 and 86,000 bpd this year, led by Cimarex’s legacy Permian, and to a lesser degree, Anadarko assets.

With few exceptions, a sampling of other high-profile public companies shows a concerted effort, for now at least, to moderate production growth while generating robust free cash flow (FCF).

With a near-company record $1.8 billion in FCF in 2021, Apache Corp averaged 227,991 boed in the fourth quarter, largely from its southern Midland and Delaware basin assets. Averaging two rigs in the Permian basin, with a third slated for the Delaware by mid-year, the company drilled and completed 12 net (13 gross) wells during the quarter in its Texas holdings, which also include the Austin Chalk, where two gross wells were turned-in-line. “Our overarching goal for the next few years is to return to pre-pandemic production levels and then invest at a pace that will sustain or modestly grow those production volumes,” President and CEO John Christmann said on Feb. 22.

Centennial Resource Development Inc. expects oil production to reach a high of 36,500 bpd this year—a 10% to 15% increase over 2021—while generating FCF of more than $400 million. Running a two-rig program, the company will drill and complete between 47 and 53 gross wells with 80% of the completions to tap the Bone Springs in Lea County, N.M.

After FCF tripled last year to a company-record $2.9 billion, Devon Energy Corp. also plans no more than 5% production growth this year. This commitment follows fourth-quarter output of 416,000 boed from a 400,000-net-acre Delaware basin leasehold—up 34% from the January 2021 closing of the WPX Energy acquisition. The company will hold production at between 570,000 and 600,000 boed from its five unconventional assets, with 60% of activity directed to the New Mexico Delaware, with an average of 14 rigs and some 220 new wells.

Ovintiv Corp. averaged 2021 Permian production of 118,000 boed, where it drilled 80 net wells and put 93 wells on production. With a 2022 FCF target of $2.9 billion, the company, as of Feb. 25, expects to hold cumulative oil and condensate production at 180,000-190,000 bpd in its core Permian, Anadarko and Montney shale plays. Ovintiv plans to average three rigs in the Permian, with 60-65 net wells put on production.

Marathon Oil Co. averaged 22,000 boed of production from its northern Delaware asset in the final quarter of 2021 and plans to put 20-25 gross wells online in 2022, all in the second half. “We are not allocating any production growth capital in 2022 and expect our total company oil and oil equivalent production to be flat with the 2021 full year averages,” Mike Henderson, executive VP of operations, said on Feb. 17. Marathon closed out 2021 with FCF of $2.2 billion. 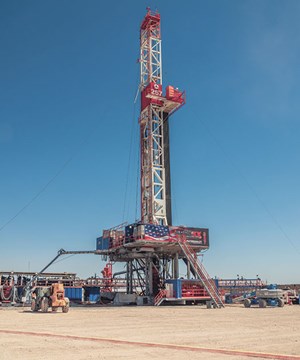 Fig. 2. Patterson-UTI super-specRig 257 is one of the 334 rigs active in the Permian during April. Image: Patterson-UTI Energy, Inc

For Bakken pioneer Continental Resources Inc., the time was right to finally stake a claim in the Permian basin. “We’ve actually been looking at the Permian for quite some time, “ CEO Bill Berry said on Feb. 15, just under two months after closing on the $3.25-billion acquisition of Pioneer’s Delaware basin asset. The deal included around 55,000 boed of production and more than 92,000 net contiguous acres, mainly in Texas’ Pecos, Reeves and Ward counties.

Continental will operate four rigs in the Permian this year with 46 wells earmarked for first oil. At the time of the Dec. 21 closing, the newly acquired assets averaged roughly 42,000 boed of production.

Pure play Pioneer, meanwhile, will focus entirely on the “high-margin” Midland basin, where it holds some 820,000 net acres. The company will operate 22-24 rigs and six frac crews in 2022 with 475-505 wells turned-in-line. With an average $30/bbl break-even cost, Pioneer estimates year-end FCF of more than $7 billion.

Pioneer intends to maintain wholly unhedged production of 623,000 to 648,000 boed this year. “With demand up, we may need those extra barrels today, but the question is will we need them in ‘23 and ‘24,” Sheffield says.

Callon Petroleum Co. is going full-bore after integrating the 35,000 net acres in Reeves County, Texas, acquired in the $788 million acquisition of tightly held Primexx Energy Partners last October. Callon says 85% of its $725 million capital allocation this year will be spent in the Permian, with production estimated at 101,000 to 105,000 boed, compared to 105,000 boed in 2021. The company will average six to seven rigs and two completion crews in the 135,000 net acres now controlled in the Midland and Delaware basins.

After spending $9.5 billion in December to snap up Shell’s Permian operations, ConocoPhillips Co. is reportedly looking to unload some Delaware basin acreage with an estimated $1 billion valuation, according to Bloomberg. A ConocoPhillips spokesman declined comment on the Feb. 11 report that the company was working with an advisor and had opened a data room for potential buyers.

ConocoPhillips is running 20 rigs and nine frac crews across its Big Three (Permian, Eagle Ford and Bakken) plays, with all but one rig active in the two Texas plays. Permian production was 483,000 boed in the fourth quarter.

“The increase in activity that we’ve seen from the privates and such will generate more production. But I think companies like ours and other large companies kind of think more of a sustainable growth rate because that’s really where you get your efficiency,” says Tim Leach, executive VP of Lower 48. 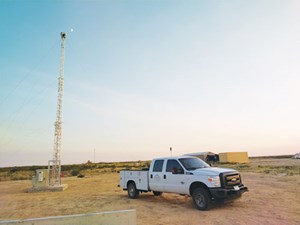 Meanwhile, in a play where nighttime flares once gave the aerial impression of a bustling city after sunset, public and private initiatives are intensifying to mitigate routine flaring and reduce greenhouse gas (GHG) emissions. While the largely industry-friendly Railroad Commission (RRC) says statewide flaring rates fell to a new low of 0.19% in November 2021, the Environmental Defense Fund (EDF) in December said a helicopter survey showed emissions continuing at a “high rate” in the Permian. The EDF said it detected methane plumes from 40% of 900 sites measured, with 14% attributed to malfunctioning flares.

Once again, Sheffield, whose company plans to reduce methane emissions intensity 75% by 2030, leveled a broadside at private operators. “Private companies continue to vent and flare, much greater than 1%. The privates need to be reined in, because they are the biggest flarers in the Permian basin,” he said.

To help meet weighty ESG objectives, operators employ a variety of gas capture and emissions monitoring mechanisms. One of the latest advancements deployed in the Permian leveraged Noble Prize-winning technology developed at the University of Colorado and the National Institutes of Standards and Technology (NIST) to engineer laser systems that detect the unique adsorption “fingerprints” of methane, carbon dioxide (CO2) and other GHG molecules.

Developed by LongPath Technologies, Inc. of Boulder, Colo., the laser-driven Basin-SCAN continuous methane monitoring and abatement technology is designed to reduce emissions by 60% to 80% in the respective coverage areas. By the end of March, 12 systems had been installed in the Permian, covering 156,000 acres across more than 160 production and gathering sites, the company said.

Jim Redden is a Houston-based consultant and a journalism graduate of Marshall University, has more than 38 years of experience as a writer, editor and corporate communicator, primarily on the upstream oil and gas industry.