Activity in the oil and gas sector accelerated during first-quarter 2022, according to oil and gas executives responding to the Dallas Fed Energy Survey. The business activity index—the survey’s broadest measure of conditions facing Eleventh District energy firms—jumped from 42.6 in the fourth quarter to 56.0, reaching its highest reading in the survey’s six-year history, Fig 1. 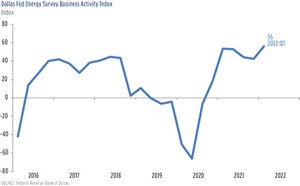 Methodology. Firms are asked whether business activity, employment, capital expenditures and other indicators increased, decreased or remained unchanged compared with the prior quarter and with the same quarter a year ago. Survey responses are used to calculate an index for each indicator. Each index is calculated by subtracting the percentage of respondents reporting a decrease from the percentage reporting an increase.

Data were collected March 9–17, and 141 energy firms responded. Of the respondents, 91 were exploration and production firms and 50 were oilfield equipment/service firms.

Special questions asked of executives for this quarter include an annual update on breakeven prices by basin; expected firm growth in crude oil production; anticipated changes in employee head counts for 2022; the oil price needed to return publicly traded producers to growth mode; and the primary reason that publicly traded producers are restraining production growth despite high oil prices. 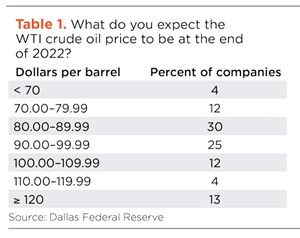 One of the special questions posed to executives was “In the top two areas in which your firm is active, what WTI oil price does your firm need to cover operating expenses for existing wells?” The results shown in Fig. 2 are quite interesting. Among shale plays in the 11th Fed District, they show a low of $23/bbl in the Eagle Ford shale to a high of $35/bbl in Permian sections other than Midland and Delaware. In non-shale plays, the figure is $38/bbl. 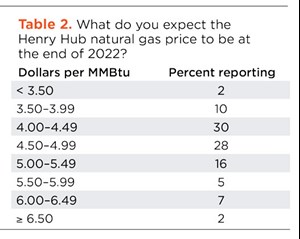 Table 2. What do you expect the Henry Hub natural gas price to be at the end of 2022?

An additional special question asked was “In the top two areas in which your firm is active, what WTI oil price does your firm need to profitably drill a new well? The results, as displayed in Fig. 3, were very divided. They averaged $48/bbl in the Eagle Ford and $50 to $54 in the various sections of the Permian. But the price required to drill a new well jumped to an average $60/bbl in non-shale plays, and it climbed further to an average $69/bbl for shale plays outside the Eagle Ford and Permian. 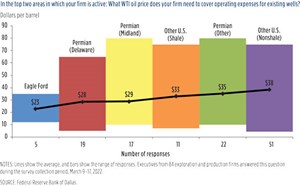 Meanwhile, one of the special questions asked was “By what percent do you expect your firm’s crude oil production to change from fourth-quarter 2021 to fourth-quarter 2022? The results for that question can be seen in Table 3. Executives from 82 E&P firms answered this question during the survey collection period. Small firms are defined as producing less than 10,000 bpd in fourth-quarter 2021, while large firms produced 10,000 bpd or more. Responses came from 62 small firms and 20 large firms. As can be seen, the answers were spread out over a variety of ranges, although smaller firms tended to project larger growth rates, and larger operators were more restrained.

Costs increased for a fifth straight quarter. Among oilfield equipment/service firms, the index for input costs increased from 69.8 to 77.1—a record high. Only one of the 50 responding oilfield equipment/service firms reported lower input costs this quarter. Among E&P firms, the index for finding and development costs advanced from 44.9 in fourth-quarter 2021 to 56.0 in first-quarter 2022. Additionally, the index for lease operating expenses also increased, from 42.0 to 58.9. Both indexes reached highs for the survey’s six-year history. 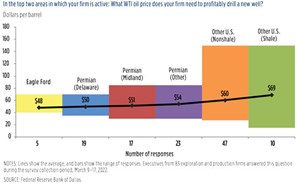 Given the rising costs, one would logically want to know at what oil price producers think that they can opt for production growth. Accordingly, another special question asked them, “What West Texas Intermediate crude oil price is necessary to get publicly traded U.S. producers back into growth mode?” As displayed in Fig. 4., roughly 40% of executives said a price of $80/bbl to $99/bbl. Another 20% of respondents said $100/bbl to $119/bbl, and a few went much higher. Interestingly, nearly 30% said that whether to grow production was not dependent on any specific price.

Following onto that topic, another special question asked executives, “Which of the following is the primary reason that publicly traded oil producers are restraining growth despite high oil prices?” As seen in Fig. 5, the number-one answer, by far, was “investor pressure to maintain capital discipline,” at 59%. The remaining 41% of executives answered either, “other,” “ESG,” “lack of access to financing,” or “government regulations.” 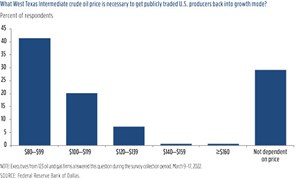 Oilfield equipment and service firms reported improvement across all indicators. The equipment utilization index remained elevated, but it edged down from 51.1 in fourth-quarter 2021 to 50.0 in first-quarter 2022. The operating margin index advanced from 11.6 to 21.3. The index of prices received for services jumped from 30.3 to 53.2, a record high. 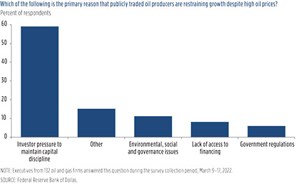 Six-month outlooks improved significantly, with the index climbing from 53.2 last quarter to 76.3, a record high. The outlook uncertainty index also jumped from -1.5 to 31.9, suggesting uncertainty became much more pronounced this quarter.

Table 4. How do you expect the number of employees at your company to change from December 2021 to December 2022?

One additional special question asked executives, “How do you expect the number of employees at your company to change from December 2021 to December 2022?” As detailed in Table 4, the leading answer was “remain the same,” with 51% of all companies selecting that answer. Yet, there were differences. A whopping 63% of E&P firms chose this answer, while only 32% of service companies did the same. The “increase slightly” option was chosen by 37% of all firms, but that also broke out to 31% of E&P firms and 48% of service companies. Overall, it’s a somewhat optimistic outlook for upstream employment.

Michael Plante
Dallas Federal Reserve Bank
Michael Plante joined the Federal Reserve Bank of Dallas in July 2010. Recent research has focused on topics, such as the economic impact of the U.S. shale oil boom, structural changes in oil price differentials and macroeconomic uncertainty. He has also been the project manager of the Dallas Fed Energy Survey since its inception in 2016. Mr. Plante received his PhD in economics from Indiana University in August 2009.

Kunal Patel
Dallas Federal Reserve Bank
Kunal Patel is a senior business economist at the Federal Reserve Bank of Dallas. He analyzes and investigates developments and topics in the oil and gas sector. Mr. Patel is also heavily involved with production of the Dallas Fed Energy Survey. Before joining the Dallas Fed in 2017, he worked in a variety of energy-related positions at Luminant, McKinsey and Co., and Bank of America Merrill Lynch. Mr. Patel received a BBA degree from the Business Honors Program at the University of Texas at Austin and an MBA in finance from the University of Texas at Dallas.
Related Articles FROM THE ARCHIVE