Stung by previously bullish price scenarios that were wrongly projected to sustain beyond the seasonal winter spikes, Appalachian gas producers are in no hurry to exponentially increase production, essentially brushing off improving fundamentals.
Jim Redden

Stung by previously bullish price scenarios that were wrongly projected to sustain beyond the seasonal winter spikes, Appalachian gas producers are in no hurry to exponentially increase production, essentially brushing off improving fundamentals. 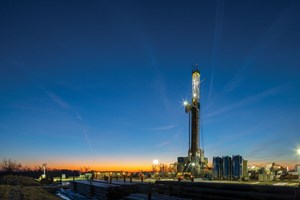 Following the cue of their more Covid-ravaged oil-producing peers, operators throughout the tri-state Marcellus and Utica shale plays are putting fiscal temperance above unfettered growth. The prioritization of maintenance over growth is reflected in the latest production estimates in the Pennsylvania, West Virginia and Ohio cores of the prolific wet and dry gas plays. The U.S. Energy Information Administration (EIA) estimates February production at 33,837 MMcfd (Fig. 1), which would be up by around 707 MMcfd, compared to February 2020’s level. The relatively modest year-over-year increase comes despite EIA estimates on Jan. 12 that Henry Hub gas prices, minus regional discounts, will average $3.01/MMBtu and $3.27/MMBtu this year and into 2022, respectively, rebounding sharply from a 2020 low of $1.33/MMBtu, which prompted basin-wide shut-ins that remained into the fourth quarter.

“You can say that if you want to use return on capital employed as a long-term return metric for investors to want to come back and really invest in this space, the industry needs $3.50 gas over the next five years to really generate that return on capital employed,” said David M. Khani, CFO of EQT Corp, which closed out 2020 with the acquisition of Chevron’s Appalachian assets.

EQT has been operating up to three of the 37 rigs that Baker Hughes counted as working in February, all but seven active in the lower-risk Marcellus, Fig. 2. A combined average of 50 rigs was drilling in the Marcellus and underlying Utica at the start of 2020. “In Appalachia, there would need to be about 30% more rigs to keep production flat,” says EQT President and CEO Toby Rice. 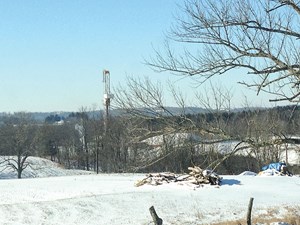 Fig. 2. Amid the winter heating season, an average 35 rigs were active across the Appalachia basin in January. Image: EQT Corp.

The nation’s leading gas-producing region is ideally positioned to do just that. Close proximity to a growing petrochemical network teases hopes for high, year-round demand, especially for Appalachia’s rich natural gas liquids (NGL) concentration. Producers, however, will have to wait a bit longer for one of the latest newbuilds to began taking up to 1.6 Mtpa of in-basin ethane, as the pandemic-induced construction delays put Shell’s polyethane cracker in Beaver County, Pa. behind schedule. As of now, the facility will not begin operation until 2022, at the earliest.

Elsewhere, PTTC America LLC is deciding whether to proceed with a proposed 1.5-million-ton/yr ethane cracker in Belmont County, Ohio. The U.S. subsidiary of Thailand’s PTT Global Chemical has said that a final investment decision (FID) would be made early this year.

Pending a positive FID, Range Resources Corp. has agreed to deliver 15,000 bpd of ethane as an anchor supplier for the proposed cracker.

Nearly 80% of Range production flows to markets outside the Appalachia basin. David Cannelongo, V.P. of Liquids Marketing and Transportation for NGL-heavy Antero Resources Corp., says most of the in-basin ethane production likely will be consumed regionally, pointing to petrochemical consumers in Ontario, Canada; Calvert City, Ky.; and elsewhere.

To help expand the consumer base, Williams Companies, Inc., is moving toward full capacity of 582.4 MMcfd early this year on the Transco Leidy South gas takeaway and gathering project, designed to connect with the consumer-rich Atlantic Seaboard. An expansion of the company’s existing Pennsylvania infrastructure, Leidy South includes new pipelines and associated gathering and compression upgrades.

Meanwhile, EQT’s sweeping $735-million acquisition of Chevron’s regional assets includes 335,000 net Marcellus acres, with net production of around 450 MMcfed, as well as a 31% stake in Laurel Mountain Midstream that takes in two water systems, and associated infrastructure in Pennsylvania and West Virginia.

Prior to the acquisition, EQT controlled 630,000 net acres in the Marcellus core and 60,00 net acres in the Ohio Utica fairway. EQT closed out 2020 with expected full-year aggregate production of between 1,480 and 1,500 Bcfe. Cumulative third-quarter sales volumes reached 366 Bcfe, despite the voluntary curtailment of 15 Bcf, which has since been returned to the production stream. Third-quarter capital spending of $248 million was $277 million less than the same quarter of 2019.

Fourth-quarter activity was confined entirely to the Pennsylvania and West Virginia Marcellus, where the company drilled a combined 25 horizontal wells, with 19 completions and 26 wells put into production. Throughout the year, EQT ran between two and three rigs and an equal number of frac spreads, drilling and completing wells with lateral lengths up to 13,800 ft.

Although the near-term supply-demand ratio “will continue to tighten as weather demand overcomes the storage overhang,” Rice said the longer-term price horizon is another matter altogether. “The forward curve for 2021 has moved up into the $3 (Mcfe) level, and the 2022 curve is now in the low $2.70s. Although important indicators, this will not cause EQT to add growth in 2021, as the curve is still too low and backward-dated,” he told analysts on Oct. 22, five days before announcing the Chevron transaction.

National Fuel’s drilling and production entity, Seneca Resources Company, LLC, planned to add a second rig in January to coincide with the planned start-up of Leidy South and its internal FM100 infrastructure expansion in northwestern Pennsylvania.

The U.S. arm of Spanish major Repsol S.A., however, suggests a resumption of drilling is afoot in the 168,400 net acres under its control in northeastern Pennsylvania, where production has averaged around 490 MMcfd. “We are, today, pushing the break-even (prices) down. So, if the prices are there, be sure that we are going to start drilling in the first quarter of 2021,” CEO Josu Jon Imaz said on a Nov. 1 call.

Though pre-acquisition cumulative production reached 623 Bcfe for the first nine months of 2020, with 73 wells turned-in-line, up from 570 Bcfe for the same 2019 period, Southwestern President and CEO Bill Way said production growth is not on the immediate radar, even with the added properties and typical winter pricing. “We have no plans to invest above-maintenance capital next year, holding production levels flat exit-to-exit from Q4 2020 to Q4 2021,” he said.

Over the first nine months of 2020, Southwestern drilled 84 wells and completed 78 wells on total drilling and completion spending of $543 million. The company averaged three rigs and three frac crews in the third quarter.

Citing an independent technical assessment that shows “decades’ worth” of profitable core acreage at gas prices of $2.50/MMcfe or lower, CNX Resources Corp, for one, will not be in the buying mode anytime soon. “We don’t need inventory,” says CEO Nicholas J. DeIuliis. “Any merger that would increase our go-forward costs would be difficult to rationalize, when we’re in a commodity manufacturing business.”

As of now, the Pittsburgh, Pa.-based operator holds more than 1 million net acres and produced an aggregate 115.7 Bcfe over the third quarter, down from 128.3 Bcfe delivered in the same quarter of 2019. 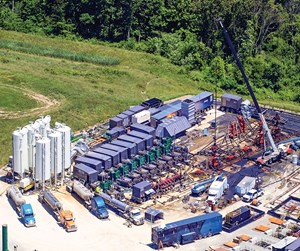 Running one rig and one frac crew (Fig. 3), CNX drilled and completed seven wells in the third quarter at average lateral lengths of 12,245 ft. During the quarter, 12 Marcellus and six Utica wells were turned-in-line.

“We’d need to see the forward strip change, and not just a one-year anomaly,” says CFO Donald W. Rush. “We’re going to use the strip and follow the strip as opposed to drilling and hoping that the gas prices in the future turn out good.”

Cabot Corp., likewise, has no intention of elevating capital spending to grow production. “With the current natural gas futures in 2022 and beyond in backwardation, and well below the $3-plus (Mcfe) environment we are anticipating in 2021, we do not believe this is the appropriate time to consider growing our production base,” says President and CEO Dan O. Dinges.

Cabot backed up its slower growth commitment by holding year-over-year production at a relatively flat 2.35 Bcfd in 2020, from a maintenance-driven capital investment of between $530 and $540 million, down 7% from the year prior. Cabot, which holds a 173,000-net-acre leasehold in the dry gas core of Susquehanna County, Pa., was down to a single frac spread in the fourth quarter and ran an average two to three rigs throughout the year. The company drilled, completed and placed around 70 wells on production in 2020.

Dinges said the Leidy South expansion will provide an attractive outlet for added production, providing future prices cooperate. “This project will provide us additional access to premium markets in the mid-Atlantic. So, if natural gas prices continue to rise in the out years, we have new outlets to support incremental value-enhancing growth.”

Despite claiming the basin’s lowest completed well costs at an average of less than $600/lateral ft, Range Resources will maintain a flat production profile for the foreseeable future. “While 2021 and even 2022 prices have improved considerably for natural gas and NGLs, we believe the forward curve remains below a sustainable long-term price,” said CEO Jeff Ventura. “This is not a market that’s incentivizing any growth.”

Consequently, Ventura does not expect production to increase beyond the 2.24 Bcfed expected for full-year 2020, even after curtailing up to 210 MMcfd of gross production from mid-September through October. As before, roughly half of 67 wells turned-in-line last year resulted from new drilling on the more than 200 existing pads across the estimated 470,000 net acres that Range controls in southwestern Pennsylvania, where it primarily targets the Marcellus stacked upside potential in the Utica and Upper Devonian horizons.

The company was expected to add a second frac spread and another rig late in the fourth quarter, “setting us up for a maintenance-level program for 2021,” Degner said.

Pure-play firm Antero is taking a different approach to maintaining fiscal and production discipline by releasing 300 MMcfd of long-haul interstate transport commitments this year. The reduced commitments to the Gulf Coast, Midwest and elsewhere do not affect in-basin capacity of wholly owned Antero Midstream Corp. The move is expected to save a combined $85 million in marketing expenses in 2021 and 2022, while “right sizing” the takeaway of excess production.

Appalachia’s second-largest NGL and third-largest dry gas producer, Antero says the reduced commitments will not impact its capacity to react to a higher price environment. “Rather than reacting with the drill bit, like we’ve done in the past, it’d be more working the transport portfolio and working that down,” says President and CFO Glen C. Warren, Jr. “We don’t have a real need to grow volumes.”

Operating on more than 542,000 net acres in the southwestern fairway of the Marcellus and Utica, Antero averaged 3,772 MMcfed of net production in the third quarter, with 27 Marcellus wells turned-in-line, as completed laterals averaged 11,937 ft. In the fourth quarter, the Denver operator was running a single rig and one completion crew.