Frac hits are costing operators billions of dollars in lost production. To help alleviate this costly issue, Nissan Chemical America Corporation (NCA) has introduced a new treatment method to mitigate the effects of frac hits and increase production in initial wells, in addition to infill projects.

As development of unconventional reservoirs continues with tighter and tighter well spacing, some of the current production and subsequent reserves of the initial well are often compromised. In many cases, the initial well consists of large, permeable fracture networks connecting to much tighter matrix reservoir rock. By the time the infill well is drilled, the initial well in the spacing unit may have already produced several hundred thousand barrels of fluid. This depletion often creates a lower-stress environment around the induced fractures of the parent well—in other words, a pressure sink may form predominantly in the fracture network.

As an infill well is drilled and completed, the initial well will become more vulnerable to an intersection from a nearby propagating fracture, leading to severe production losses. In addition, fracture fluid and proppant communication may occur between the neighboring wells, also leading to an ineffective stimulation of the infill well. As the name—frac hit—suggests, a powerful force is unleashed that can also result in severe damage to production tubing, casing, and wellheads.

Infill wells often demonstrate production performance of 60% or less when compared to the existing initial well. Initial well interference can include undesirable increases in water production, as well as oil output decreases that frequently do not return to their previous levels. Numerous causes have been cited, including stress reversal, tendency of infill well fractures to grow toward initial well fracture networks, and improper well spacing.

It has been reported that the longer the initial well has been on production, the higher the likelihood of an induced stress change, resulting in a higher probability of infill well interference. Negative influences can be seen in the form of fines migration, proppant migration, or fluid pressure communication between the infill well frac zone to the initial well frac zone, and vice-versa.

With intense pressure from c-suites and investors to cut costs and increase production, hydraulic fracture interference, or frac hits, is an increasing problem in today’s more mature unconventional fields. Operators must develop strategies to combat production losses caused by frac hits. Refracturing has been explored as a potential solution, however, there are limitations when it comes to the cost-effectiveness of this process. 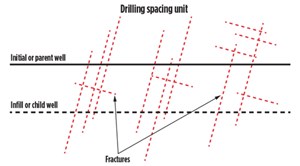 Fig. 1. The solid black line is an existing well, and the black dashed line is a new well drilled and being prepped for initial fracture stimulation. The smaller hatched lines represent natural fractures in the unconventional reservoir rock. 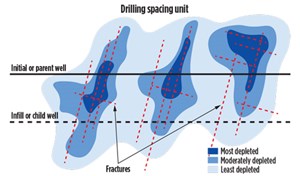 To help mitigate frac-hits, NCA and distributor, ELS, developed a method of driving, by fluid, a patent-pending well-additive treatment and method (nanoActiv), which is mechanically powered by highly surface-modified silicon dioxide particles. Nissan Chemical has been perfecting nanoparticle technology since 1951, and is one of the first companies to produce highly surface-modified colloidal particles for industrial applications.

The company’s nanoActiv technologies are highly surface-modified colloidal silica nanoparticles, designed to penetrate deep into the reservoir and persist with long efficacy. They are used for a variety of applications, including new well completions, remediations, re-stimulations and production services.

Through Brownian motion, nanoActiv HRT (hydrocarbon recovery technology) deploys what is known as “disjoining pressure,” a phenomenon that suggests nanoparticles lift hydrocarbons from the rock surface at the three-phase contact angle. The technology surrounds hydrocarbon drops, fragmenting them into smaller droplets, enabling efficient flowback to the wellbore. Once treated, particles exhibit substantial persistence and remain within the matrix and natural fracture network after contact flow-through, facilitating ongoing improved hydrocarbon mobility.

Another component of the treatment method uses nanoActiv  EFT (enhanced flowback technology), which is a nanoparticle micellar dispersion, stabilized using a synergistic combination of distinctive highly surface-modified silica nanoparticles, a soybean extract solvent, and a blend of surfactants. It exhibits an effective primary chemical action, enhanced with the added mechanical properties of the company’s nanotechnology. EFT delivers the unique advantages of diffusion, disjoining pressure and fragmentation. It also reduces interfacial tension for improved stimulation fluid interaction within the reservoir near the created and propped fracture facies, as well as throughout the entire propped fracture network—increasing initial oil and gas production.

In 2019, Dr. Hassan Dehghanpour (University of Alberta) demonstrated the interfacial tension (IFT) reduction and wettability modification potential of the well-additive treatment. As wettability affects the relative permeability, the wetting state can significantly impact the productivity of a well. Scientific research concluded that the treatment method altered the wettability of Montney
formation core samples from oil-wet to water-wet conditions.

Due to wettability alteration, the technology imbibed more quickly into oil-saturated core plugs during Amott Cell testing, compared to the reservoir brine base case, Fig. 4. 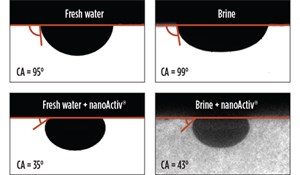 Imbibition of the well-additive treatment expels the oil out of the core plug, and the measured volume of produced oil divided by the initial oil in the plug is reported as an oil recovery factor, Fig. 5. 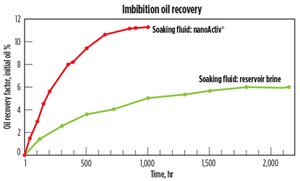 “ELS informed us that frac hits were devastating production and operator profits,” explains John Southwell, NCA’s technical director, North America. “So, we worked together to develop a method of combining our patent-pending nanoparticles with a unique pre-loading technique, to mitigate the effects of frac hits.”

Nissan’s frac hit mitigation process begins when nanoActiv is deployed into the initial well during the re-pressurization process. The well-additive treatment, in HRT or EFT, is injected as pills or intermixed with a total volume of injected fluid. While the added fluid provides the benefits of a temporary high-stress barrier near the initial well, the nanoparticles provide the benefit of significant IFT reduction, as well as wettability modification near the wellbore, to create a much more favorable fluid-flow environment. Consequently, fracture interactions are mitigated, and more hydrocarbons are produced.

Shear fractures in infill wells are problematic in the Permian basin. Initial wells are getting crushed by offset fracs, and the infill wells, themselves, aren’t producing up to expectations. The frac hit mitigation technology is a key change element in improving production results of these closely spaced horizontal shale wells. “nanoActiv represents a step-change in technology that improves profitability” states Stephen Gornick, NCA chief reservoir engineer.

On a recent job in the Permian basin, Shear Frac Group LLC measured the type and amount of fractures created per second on the infill pad with their proprietary technology, Frac BRAIN. The infill well closest to the nanoActiv preloads showed a significant increase in the cumulative fracture count, compared to the other adjacent infill wells on the pad. Shear Frac’s engineer explained that normally infill wells have lower fracture counts, due to offset depletion; however, this was not observed in this well.

Engineers from the operator believe the reason that the initial preload was so effective with NCA’s EFT technology is because the small size (12-15 nm) of the surface-modified nanoparticles in the fluid caused the preload fluid to access parts of the tight rock that normal fluid wouldn’t enter—saturating the rock near the infill well. Combine that with a pressure barrier and lowering of the surface tension of the preload fluid by the components of EFT, and you get optimal infill fracturing. Add to this the fact that EFT was preloaded into initial wells, returned to oil production less than 10 days after coming online (one recent well is exceeding previous production amounts within the first week), and the operator is proceeding to target future pads as nanoActiv preload candidates.

nanoActiv has consistently caused oil to flow back sooner than the operator expected—with the well actually exceeding pre-treatment production levels. The product has been pumped in various initial well pre-load jobs across the Eagle Ford shale, and Anadarko and Permian basins.

The first case study presented consists of a treatment of 5,000 gal of product, injected as smaller-volume pills throughout the initial pre-load for a well in Dewitt County in the Eagle Ford. The treatment was allowed to soak for approximately 2½ weeks during the infill well work to allow the nanoparticles to diffuse out into the reservoir, and to alter the wettability of the formation to create more favorable fluid-flow conditions. For Well A, a significant increase in monthly oil production was observed, post-treatment, where the pre-load treatment has surpassed the previous production rate for more than six months, Fig. 6. 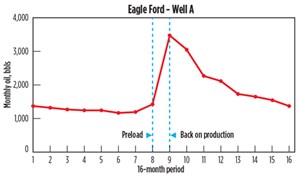 Well B shows the case history of the second initial well pre-load treatment in Dewitt County, Texas, in the Eagle Ford. Again, 5,000 gal were used for the treatment, with a soak time of approximately 2½ weeks. A significant increase in production can be seen for up to four months post-treatment, Fig. 7. 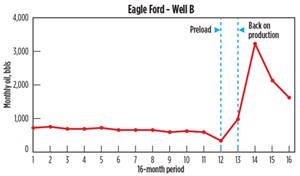 Well C shows production data from an Eagle Ford well in Dewitt County, which was treated with 2,500 gal of nanoActiv pills injected throughout the initial well pre-load with a 2½ week soak time. Similar to Well B, a significant increase in production was experienced for four months post-treatment, Fig. 8. 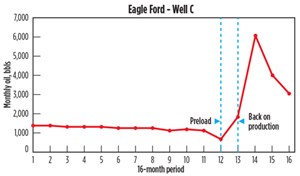 The operator of the above case study wells said, on average, initial well production was returning to only 65% bopd, prior to the offset fracture interference. However, after treatment with product preloads, they are seeing initial wells surpass previous production rates.

The second case study documents positive results in two Mississippian wells in Grady County, Okla. Well A was treated with 17,000 gal of product pumped intermittently throughout the initial well pre-load. The data demonstrate a reversed trend in the production losses caused by frac hits after treatment, Fig. 9. 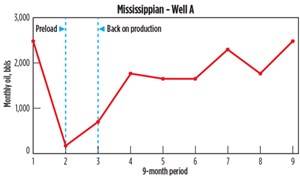 A similar trend was observed in Well B, where the treatment volume was reduced to 4,500 gal, pumped throughout the preload job, with approximately 2½ weeks soak time, Fig. 10. 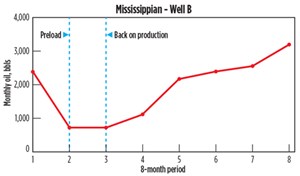 The effects of frac hits can be significantly mitigated by using the patent-pending process of combining a re-pressurization fluid with nanoActiv. The technologies work to reduce interfacial tension and modify wettability—allowing more hydrocarbons to be mobilized in a re-pressurized environment created by using large volumes of injected fluid. Consequently, frac hits are mitigated and more hydrocarbons are produced—increasing production and profitability.