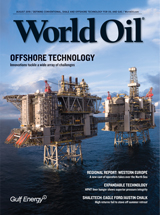 Kurt Abraham
Activity may pick up to near-record levels in the next several years, as the province continues to encourage technical innovation.

Emily Querubin
Since the 1960s, the North Sea has remained a highly sought-after region for oil and gas E&P.

Jim Redden
The caliche roads cutting through the blackbrush and mesquite of the South Texas brush country are a bit less congested of late, as Eagle Ford drilling and completion activity dips in what is ranked among the most profitable of the unconventional plays.

Taking the heat and enduring the pressure

Jim Redden
Catching up with the times

Don Francis
What is a well?

Craig Fleming
Eni has completed drilling on Agogo-2, the first appraisal well of the Agogo discovery in Block 15/06, offshore Angola.

Craig Fleming
Crude benchmarks remained relatively steady in July, despite escalating political tension in the Persian Gulf and the resumption of talks aimed to resolve a trade dispute between the U.S. and China, which could spark increased demand.