There are approximately 3,650 development wells on the UK Continental Shelf waiting to be plugged and abandoned (P&A), according to the UK Oil & Gas Authority. In addition, there may be many partially suspended or abandoned wells that require final abandonment.

As demand rises to shut-in and decommission these and other wells, P&A activity will evolve from being a single-well project to a dedicated, multi-well abandonment campaign. Deploying the most appropriate technology is crucial in what is a non-value but necessary activity. Doing so is necessary to reducing rig time and costs, and meeting stringent regulations while assuring safety and integrity. Combining traditional techniques to prepare a well for P&A can improve efficiency and cut the hefty cost associated with permanently ending a well’s productive life.

To ensure a well is permanently abandoned, competent barriers are placed in the wellbore to mitigate flow between zones and the reservoir, and prevent returns to the surface.

For many operators, section milling or cut-and-pull operations have become the conventional technique in recent P&A operations. Section milling is a method of casing removal, but it can be time-consuming and expensive, due to the unpredictable nature of milling operations. One of its main disadvantages is the creation and removal of metal filings, or swarf, produced through the milling process, which can present safety risks to the workforce at surface.

Perf-and-wash activity has grown in popularity as a method for placing annular cement in abandonment applications. The technique perforates the casing before washing the annulus and cleaning the perforated zone. Cement is pumped into the perforations and the B-annulus, enabling permanent rock-to-rock cement plugging in a single trip and negating the need for milling and debris handling. However, perforating such long intervals of casing to gain access to the B-annulus requires a large amount of equipment, often making this an expensive operation.

Coretrax developed the Double Perf and Squeeze system as a one-trip solution for annular cementing operations. The system combines tried-and-tested tools to reduce costs and improve the reliability of well abandonment preparation, Fig 1. 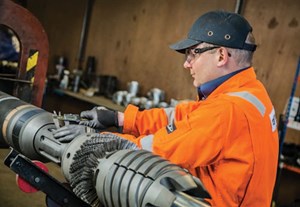 Fig. 1. Modular perf-and-squeeze is a single-trip system for annular cementing.

The CX-2 bridge plug is used for multiple applications, including well abandonment. The drillable plug is set with a combination of hydraulic pressure and mechanical pull. An integrated running tool provides a slickline OD and large ID.

As there is no mechanical setting tool, when the bridge plug is disconnected, only the slickline stinger remains, ensuring that any cement pumped afterwards is not disturbed when pulling out of hole. Traditionally, many pipe-conveyed bridge plugs require a mechanical setting tool with a large OD, meaning that if cement is to be displaced on top of a retainer, two trips are often required.

With over 430 of the bridge plugs run, the tool was the basis for design and development of a cement retainer that does not use a mechanical setting tool. An industry first, the CX-SV sliding valve is the centerpiece of the perf-and-squeeze system. It has the same attributes of the bridge plug, including a slickline setting tool. The valve allows two sets of perforations to be made, to enable casing cleaning, a cement squeeze, and placement of the cement plug to be performed in just one trip, Fig 2. 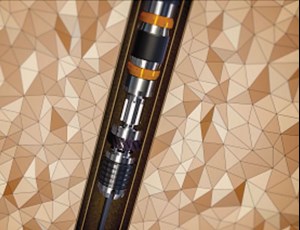 Several essential steps in placing annular cement for well abandonment are addressed by grouping the perforating gun system with the CX-SV valve, a CX-Superflow sacrificial scraper/brush tool, and a CX-SRM swarf recovery magnet.

The one-trip device combines two sets of perforating guns with pressure-actuated firing heads run beneath the CX-SVvalve and brush/scraper tool. Each firing head is set at different pressures, to ensure that only one set of guns is fired at a time.

While running in the hole, the sacrificial cleaning tool scrapes, brushes and jets the casing ID to remove debris. Patented features allow the tool to be run with bridge plugs and cement retainers. It removes residue, such as cement and other foreign debris, from the casing ID and creates a smooth surface to ensure an effective cement bond. Once at the setting depth, circulation through ports at the bottom of the sliding valve helps remove debris from the wellbore.

A ball dropped from surface activates the sliding valve. When the string is pressured up to approximately 2,500 psi, the setting sleeve shifts, hydraulically triggering the top slips. Over-pull is applied to mechanically set the bottom slips, allowing the element to pack off securely against the casing ID. The sliding valve remains open, allowing for communication below the retainer.

Setting the sliding valve isolates the well below to regain pressure integrity. Pressuring up under the sliding valve allows the second set of pressure-actuated firing guns to be fired to create the second set of perforations. Circulation between the two sets of perforations is then established to remove residual oil-based mud or debris from the B-annulus before cementing operations begin.

Once the annulus is cleaned, cement is pumped through the CX-SV valve to perform a conventional cement squeeze through the bottom perforations. Once the cement has been displaced into the annulus, the stinger is released from inside the sliding valve. The work string is then picked up to close the sliding valve, and the stinger is pulled above the retainer. As required, additional cement can then be placed on top of the cement retainer using the slickline stinger.

While the perf-and-squeeze system does not generate high volumes of swarf during milling operations, the perforation burrs need to be captured at surface. The high-strength recovery magnet is used to remove metal cuttings and prevent debris from returning downhole, Fig. 3. 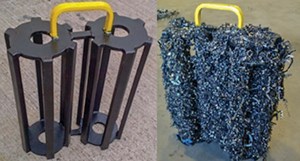 Placed in the flowlines, the swarf recovery magnet can collect up to 30 kg of metallic debris to ensure the drilling fluid returned downhole is as clean as possible. This protects the rig pumps from being damaged, and it ensures that the mud system is clear for future activities. The magnet’s high surface area is easily cleaned to minimize swarf exposure.

The CX- Double Perf-and-Squeeze system effectively addresses challenges associated with placement of annular cement in an abandonment environment. As the industry continues to drive for efficiencies, the technology saves valuable rig time while creating a turnkey solution for this aspect of decommissioning. WO

About the Authors
Lyndsay Harley
Coretrax
Lyndsay Harley is the Coretrax operations manager for UK operations. She joined the company in 2013 as an operations engineer, working with wellbore cleaning and wellbore abandonment product lines.
Related Articles FROM THE ARCHIVE