As Texas Secretary of State, a big part of my job is to help facilitate commerce between Texas and Mexico. It’s no secret that Texas and Mexico are each other’s top trading partner. As neighbors, we have developed a most unique, powerful trade relationship, which has ensured our state’s economic success. A keen focus on cooperation and collaboration over the years has helped build strong cross-border trade opportunities in manufacturing, agriculture, logistics and tourism. Now, in the wake of Mexico’s historic energy reforms implemented since 2014, Texas and Mexico have a new opportunity to build upon that success by collaborating on yet another vital sector—energy.

Since taking office as Texas Secretary of State in January, I have focused intently on developing relationships within what I call the Texas-Mexico Energy Nexus—that is, the confluence of stakeholders on both sides of the border in seizing mutually beneficial opportunities to expand coordination in energy; whether it be in trading hydrocarbons or electrons.

As outlined by Railroad Commissioner Ryan Sitton, Mexico imports roughly 60% of its natural gas from the U.S., most of which comes from Texas. To put this in perspective, about 112 Bcf of gas travels from Texas to Mexico each month via pipeline. The vast majority of U.S. gas exports to Mexico travels through Texas port cities, placing the Lone Star State in a uniquely strategic position to benefit from increased energy trade, according to the Energy Information Administration. During peak times, the U.S. exports between 300,000 and 400,000 Mwh of electricity to Mexico each month. 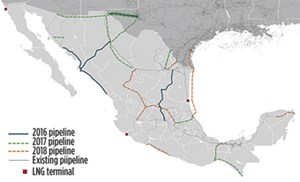 However, in examining the energy infrastructure of Mexico (Fig. 1), one finds that it is wide open for development—ready for Texas oil and gas, and electric companies to engage and share their expertise.

Texas is the right partner—and the best partner—to help take this development to the next level. Texas has both capital and a skill set to offer Mexico, as it seeks to develop its energy infrastructure and modernize its facilities. It should be no surprise, that the potential is enormous for Texas energy leaders to expand in a newly privatized Mexican energy market.

This fact has not gone unnoticed by Mexican energy officials. During my first official visit as Secretary of State to Mexico City, I engaged in constructive talks with officials at SENER, Mexico’s ministry of energy, to discuss opportunities for collaboration. One underlying issue we identified was that many Texas companies did not have a complete understanding of the breadth of opportunities in the Mexican energy market. Recognizing this gap in knowledge, I have set out to improve communication between Mexican government officials and Texas energy enterprises, to ensure that Texas businesses are leaders in this endeavor.

Under Governor Greg Abbott’s leadership, we have worked to connect executives from top Texas energy companies with Mexican energy officials at SENER and PEMEX. Most recently, in September, Governor Abbott hosted a meeting between Texas energy leaders and PEMEX CEO Jose Antonio Gonzalez-Anaya at the Governor’s Mansion in Austin, where he displayed his sincere commitment to promoting energy dialogue between Texas and Mexico.

The very next day, I convened my second Border Trade Advisory Committee (BTAC) meeting at the Texas Deparment of Transportation headquarters, where I led a panel discussion featuring Railroad Commissioner Sitton, Hunt Mexico President Enrique Marroquin, and Dr. Regina García-Cuéllar, chief of staff to the director general of PEMEX. The panel discussion, entitled Perspectives on the Importance of Mexico’s Reform of the Energy Sector, focused on opportunities arising from Mexico’s historic energy reforms, and examined strategies for strengthening cross-border partnerships in energy production and trade. The BTAC has served as an ideal platform for renewing our focus on cross-border energy integration while working to inject even more opportunities for economic growth on both sides of the border.

During this year’s OTC in Houston, we began our statewide efforts to connect Mexican opportunities to Texas companies by hosting a roundtable informational session. Last month in Dallas, we repeated the same program. In partnership with the Texas-Mexico Center at Southern Methodist University, I hosted a group of top Texas energy executives for a presentation by Dr. Aldo Flores Quiroga, Undersecretary of Hydrocarbons for SENER. Utilizing this important forum, Dr. Flores and I highlighted the benefits of cross-border energy trade and addressed many of the questions raised by executives, who may be new to Mexico’s energy landscape.

The exciting developments we have witnessed this year, however, are only the beginning of what I believe will be an auspicious relationship between Texas and Mexico energy stakeholders. As Secretary of State, I am constantly seeking new ways to communicate the variety of opportunities available to Texas companies in doing business in, and with, Mexico. I welcome new, creative venues through which we can continue to spread awareness of these opportunities within the Texas-Mexico Energy Nexus.