When the late Bob Rose was president and CEO of Diamond Offshore, he famously quipped that he envisioned the rig of the future being crewed with a man and a dog: The man was needed to feed the dog; the dog was onboard to keep the man from touching anything.

Flash forward a couple of decades, and hands-free drilling remains the stuff of fantasy. However, Noble Corp. believes it has made a significant “incremental step in the journey” to full automation with the meshing of software and hardware on its newbuild Lloyd Noble jackup, says Simon Johnson, senior V.P. of marketing and contracts. Billed as the industry’s largest jackup, the “ultra-high-specification” Lloyd Noble is scheduled to make its field debut in mid-October, with the pre-drilling of production wells on Statoil-operated Mariner field in the UK North Sea, 95 mi east of the Shetland Islands. With its July delivery, the harsh environment jackup is the first based jointly on the GustoMSC CJ70 design and Statoil’s “Category J” specifications for year-round North Sea operations.

The oversized jackup measures 344×291×39 ft, is rated with a 2 million-lb hookload, a cantilever envelope of 110×74 ft, and 140 personnel onboard (POB) capacity. The Lloyd Noble is capable of operating in up to 500 ft of water, at well depths of at least 32,000 ft. Importantly, its 702-ft legs provide a 250-ft air gap between sea level and the rig, to prevent the excessive slamming loads of high North Sea waves. 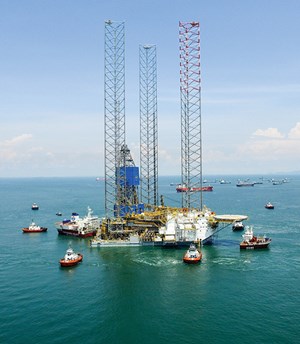 The Lloyd Noble jackup is loaded out at Sembcorp Marine’s Jurong shipyard in Singapore to begin its 12,300-nautical-mi transit to the UK, where it is expected to arrive in September to begin a four-year charter with Statoil.

The Lloyd Noble also incorporates dual-activity features, allowing parallel operations on the drill floor and in the moonpool. “The rig is state-of-the-art technology in every respect,” Simon said. “It represents the integration of existing modern technology in a jackup drilling rig, with all the bells and whistles working together in the most effective way.”

New-generation controls. Those bells and whistles include an advanced version of multi-machine controls (MMC) to automatically control pipe handling and similarly repetitive rig floor activities. Unlike typical semi-automatic drill floor networks, the software, rather than an individual, determines operational sequences. “We’re at a stage, where we can string the sequences together. An activity or series of activities essentially can be performed by the software, as opposed to requiring intervention of the operator at critical times,” Simon said. “This represents the latest generation of this approach, with more robustness and the ability to potentially integrate with other third parties on the rig.”

He sees that integration eventually extending from the drill floor to the wellbore. “We’re not there yet, and the rig certainly is not being delivered with that functionality. But, the ultimate expression would be the ability of the surface equipment to react to downhole conditions. One example would be closing the BOP, rather than waiting for a human to recognize there’s been a gain in the pit or whatever. Instead, you would have pre-set parameters that would respond to downhole sensors that would detect an influx or a whole range of different things. The rig definitely has the potential to be upgraded, when we move to the next generation with automated response to downhole conditions.”

Atypical redundancies. Automated controls aside, Simon said the rig is equipped with an unprecedented level of redundancy that “really hasn’t been seen before on a jackup,” including dual pipe rackers and tubular make-up machines. As reflected in the higher air gap, and specially engineered safety escape chutes to reduce the effective lowering distance of lifeboats, the Lloyd Noble in many respects went beyond the standard features of the CJ70 and Cat J designs, he said.

“We also applied a dynamic positioning-type philosophy, in that we have separate engine rooms. We looked at single-point failures that might exist in critical power and hydraulic systems, and spent a great deal of effort in eliminating them, or providing ways to work around problems should they occur. All this is aimed at maximizing uptime and minimizing the risks of single-point failures.”

“The end result is the ability at the wellsite to remove some of the frailties of human communication, and ensure it operates in a more consistent, repeatable/predictable manner and remove the human variation from the performance side.”

While the goal is to enhance the drilling process and make it less people-intensive, Simon said experienced human surveillance must remain front and center. “You can’t just move to a single integrated system. You still must have checks and balances of the different wellsite participants.”

That brings us back to Rose’s jocular vision for automation. “That’s very insightful and ultimately that’s where we’re headed. But, the dog is more likely to be a very experienced drilling superintendent, looking at a bunch of screens at a location a long, long way from the wellsite. There’s no substitution for that informed oversight,” Simon says.

Jim Redden
Contributing Editor
Jim Redden is a Houston-based consultant and a journalism graduate of Marshall University, has more than 38 years of experience as a writer, editor and corporate communicator, primarily on the upstream oil and gas industry.
Related Articles FROM THE ARCHIVE