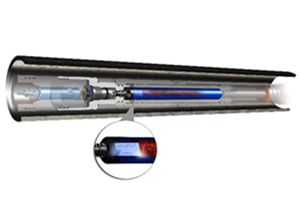 Enabled by Hunting’s ControlFire Recon technology, PowerSet Recon is the industry’s only fully addressable power charge, which can be interrogated downhole with ControlFire software and at the surface with Hunting’s VeriFire panel. Complete with a built-in initiation device that eliminates the need for plug switches and igniters, PowerSet Recon is available in sizes #10F (fast-burning) and #20, and is compatible with Hunting’s T-Set setting tools.

PowerSet Recon completes the first and only fully addressable plug-and-perf tool string. This advanced technology allows the user to read the Powerset Recon resistance at any time, assuring all components are in place and in working order when running in hole.

PowerSet Recon charges are available through Hunting’s network of distribution centers strategically located in all the world’s oil-producing regions.