(Bloomberg) — The U.S. Supreme Court rejected an appeal by Energy Transfer LP’s Dakota Access Pipeline, letting stand a ruling that required a new federal environmental analysis and left the pipeline vulnerable to being shut down. 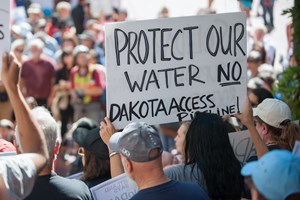 Making no comment, the justices refused to question a federal appeals court ruling that said the Army Corps of Engineers should have prepared an environmental impact statement before granting the pipeline the right to cross under Lake Oahe in North Dakota.

The rebuff leaves uncertainty surrounding the 1,200-mile pipeline, which carries 200 million barrels of crude a year from North Dakota’s Bakken oil fields to Illinois’ Patoka oil terminal. Continental Resources Inc. is among the producers that rely on the Dakota Access line.

Although President Joe Biden’s administration has said it won’t shut down the pipeline in the near term, Dakota Access has been the focus of intense opposition by climate activists, celebrities and Native Americans.

The Corps approved the pipeline to run under Lake Oahe during the first weeks of former President Donald Trump’s administration. The line has been operational since March 2017.

In its appeal, Dakota Access said a three-judge panel improperly substituted its judgment for that of the Corps. The appeal centered on the 1969 National Environmental Policy Act, which requires a detailed environmental impact statement if a project is likely to have a significant effect.

“Congress tasked agencies -- not the courts -- with deciding which environmental impacts are ‘significant,’ requiring an EIS,” Dakota Access argued.

The Biden administration and five Sioux tribes urged the high court to reject the appeal. U.S. Solicitor General Elizabeth Prelogar told the justices the case had “limited prospective significance,” in part because a key set of environmental regulations was revised in 2020.

The January 2021 decision by the U.S. Court of Appeals for the D.C. Circuit was a mixed one. Even as it required the environmental impact statement, the panel said a trial judge went too far by ordering the pipeline shut down and emptied of oil.